Background: ECG Imaging (ECGI) has been used to guide treatment of ventricular ectopy and arrhythmias. However, the accuracy of ECGI in localising the origin of arrhythmias during catheter ablation of ventricular tachycardia (VT) in structurally abnormal hearts remains to be fully validated.

Methods: During catheter ablation of VT simultaneous mapping was performed using electro-anatomical mapping (EAM) (CARTO, Biosense-Webster) and ECGI (CardioInsight™, Medtronic) in 18 patients. Sites of entrainment, pace-mapping and termination during ablation were used to define the VT site of origin (SoO). Distance between SoO and areas of earliest activation on ECGI (sites within earliest 5% of activation time) were measured using co-registered geometries from both systems. The accuracy of ECGI versus a 12-lead surface ECG algorithm was compared.

Results: A total of 29 VTs were available for comparison. Distance between SoO and area of earliest activation in ECGI was 9.1 (0.0–15.5) mm (median, first-third quartile). This was lower for pacemapped VTs versus those entrained/terminated with ablation (p=0.036) and not different between ischaemic versus non-ischaemic cardiomyopathy (p=0.063) or between septal versus non-septal VTs (p=0.849). ECGI mapped VT sites of origin onto the correct AHA segment with higher accuracy than a validated 12-lead ECG algorithm (83.3% versus 38.9%, p=0.015). Example of VT with whole diastolic pathway mapped on EAM and ECGI early activating site can be seen in the figure. 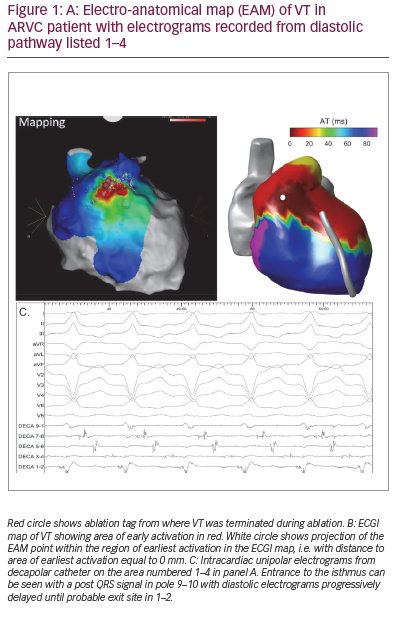