Introduction: There are large geographical differences in implantable cardioverter defibrillator (ICD) implantation rates for reasons not completely understood. One of the many factors that may contribute is ethnicity. In an increasingly multi-ethnic population, we sought to investigate the impact of South Asian (SA) ethnicity in comparison to Caucasian ethnicity in the implantation of ICDs.
Methods: A retrospective, cohort study of ICD implantation or upgrade to ICD from June 2006 to February 2019 in recipients of Caucasian or SA ethnicity at a single tertiary centre. Data was obtained from the routinely collected local registry. Crude rates of ICD implantation were calculated using the UK National Census 2011 for Leicestershire to obtain the population at risk.
Results: The Leicestershire population was 980,328 at the time of the Census, of which 761,403 (77.7%) were Caucasian and 155,500 (15.8%) were SA. During the study period, 4,038 procedures were recorded. Of these, 2,650 de novo ICD implants or upgrade to ICDs in Caucasians (91.9%) and SAs (8.1%) patients were performed. The cumulative rate of ICD implantation/upgrade over the study period was 2.70/1,000 population. The cumulative rate during the study period for Caucasians was 2.48/1,000 whilst SAs was 0.21/1,000. The incidence was higher in Caucasians than SAs (3.20/1,000 versus 1.37/1,000 respectively; difference 1.82, 95% CI 1.59–2.04, p<0.0001). At the time of ICD implant/upgrade, SAs were significantly younger, had a greater burden of ischaemic heart disease, and a shorter QRS duration. They were more likely to have a primary prevention indication with a greater proportion with severely impaired left ventricular function.
Conclusions: Despite an equitable healthcare system, ICD implantation rates were significantly lower in the SA than Caucasian population residing in the UK. Whether this is due to lower susceptibility, cultural acceptance, or an unbalanced consideration is unclear. 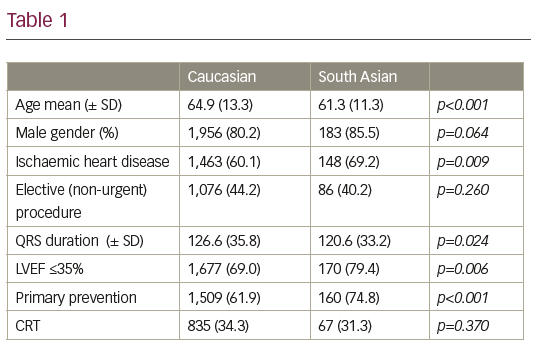