Introduction: There have been many advances in reducing the rate of inappropriate ICD therapy through standardised programming and enhanced discrimination features (Friedman P et al., 2014). ICD discriminators have evolved over time and now offer better sensitivity and specificity in SVT versus VT detection. Despite this, there are instances where patients still receive inappropriate therapy for arrhythmias incorrectly classified by the device.

Case: An 84-year-old male with a background of ischaemic cardiomyopathy was implanted with a primary prevention CRT-D in 2011 and underwent a generator change in 2019 with an Abbott Quadra Assura CRT-D device. Post generator change, multiple remote monitoring transmissions were received for arrhythmia between 01:00 am and 02:00 am over a 15-day period. The transmissions showed prolonged periods of nocturnal VT with a cycle length of 516ms. All episodes were terminated successfully with 1–2 cycles of burst ATP however detection was delayed on some occasions due to inappropriate discrimination (Figure 1). 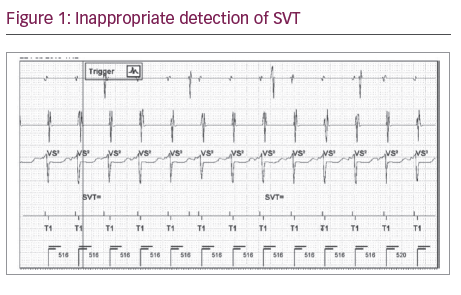 The OPTION trial (Kolb et al., 2014) concluded that dual chamber discriminators reduced the risk of inappropriate shocks compared to single chamber discriminators. Equally, Peterson P et al. (2017) found that in those with no pacing indication, dual chamber devices did not offer any significant reduction in inappropriate therapies. There have been no studies which directly compared discriminators between manufacturers. Direct comparison is often difficult because the same term can mean different things across different manufacturers and there is also variation in the decision tree for dual chamber discrimination. In Medtronic devices, onset and stability come before the A and V relationship. In the Abbott, Boston Scientific and Biotronik, the A and V relationship is established first. Brown M L et al., 2002 evaluated the effectiveness of Medtronic’s PR logic with the addition of wavelet in appropriate discrimination of SVT versus VT. It found that the combination of wavelet with PR logic reduced false positive detections by 79%.