Introduction: Despite ongoing debate over long term clinical outcomes, persistent AF termination rates have increased since the advent of AF driver mapping, but recent trials have cast doubt on the efficacy of complex fractionated atrial electrograms (CFAE) based mapping strategies. We set out to study a consecutive single centre series pre-and post- use of spatio-temporal dispersion (STD) to identify termination rates between the two approaches.

Results: In total, 38 patients were studied at redo ablation for persistent AF (age 69, 87% male, LA diameter 4.5cm). Termination of persistent AF to SR (30%) or AT (70%) was obtained in 30/38 (79%) of the group with STD based substrate ablation versus 1/38 (3%) in patients mapped with CFAE targeting using identical equipment and operator (p<0.001). Procedure time was no different between STD and CFAE based approaches (263 versus 248 mins, p=ns). Figure shows STD patterns (red arrows) on PentaRay in a 67-year-old man anterior to left inferior pulmonary vein (A), where ablation terminated AF to sinus rhythm. Electrogram features of termination sites are currently being analysed, and long-term outcome data collected.

Conclusions: In this single centre series of persistent AF ablations, the use of STD mapping significantly increased rates of termination compared to a fractionation-based mapping strategy alone, without increasing overall procedure time. Whether this translates to a better long-term clinical outcome should be the subject of future randomised clinical trials. 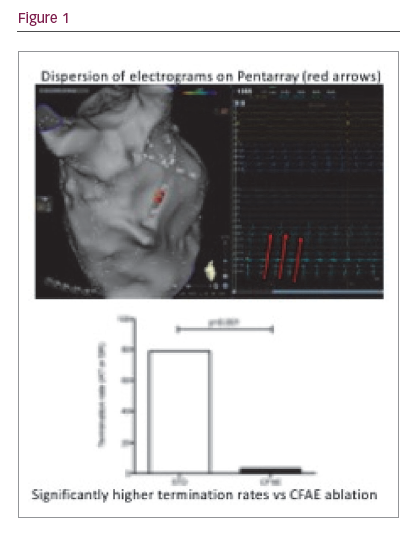