Background: Nottingham University Hospitals NHS Trust comprises two large hospitals. Cardiology services are located at the Nottingham City Hospital (NCH) whereas the Queens Medical Centre (QMC) houses the Emergency Department, Acute Medical Admissions and other acute specialties. Due to the national shortage of physiologists (Phys), the complement of Phys is fully utilised in the morning at NCH, such that physical cardiac implantable device (CIED) checks at QMC can only be performed in the afternoon, resulting in delay to patient flow.

CareLink ExpressTM (CLE) is a portable remote transmitter which allows downloads from Medtronic CIED’s (one-third of our patient population) to be transmitted to the central server, CareLink®.

Aims: In July 2017, we acquired two CLE transmitters, and trained our Cardiology Specialist Nurses based at QMC to use these to perform CIED checks. Transmitted downloads were then interpreted by Phys at NCH, who subsequently fed back to the patient’s caregivers at QMC. We aimed to assess the impact of CLE on the management of patients at QMC, and on Phys’ workload.

Results: During this period, of a total of 232 CIED checks were undertaken (44 CLE by specialist nurses; 188 physical checks by Phys). The CIED’s being interrogated consisted of 20 implantable loop recorders, 10 pacemakers, 11 implantable cardioverter defibrillators, and 3 cardiac resynchronisation therapy devices. CLE checks were performed every day of the week, including weekends.

The location of patients who underwent CLE check was: Emergency Department 30%; Acute Admissions Unit 32%; other ward 30%, and 8% were not documented. Figure 1 shows the findings on CLE check, and the subsequent management of the patients. No abnormal findings were found in 21 (44%) patients, with another 4 (9%) having sinus tachycardia. The majority of patients (32 [72.8%]) did not require a change in management, such that their discharge could be expedited. In the minority of patients who required further intervention (12 [27.2%]), the management plan could also be expedited.

Conclusion: About one-fifth (19%) of all CIED checks at QMC were undertaken via CLE in one year, resulting in a significant decrease in the number of physical checks by Phys at QMC. Around half of these checks (46%) were performed in the morning representing a much faster response time compared to physical checks, with the majority of patients undergoing CLE check being in acute areas (62%) where timely assessment is crucial to maintain patient flow.

CLE has limited use if the CIED is not a Medtronic CIED, or if the Phys need to carry out device re-programming at the same time as the check, however it has shown itself to be an essential adjunct to performing CIED checks at our institution, and its use is likely to increase. 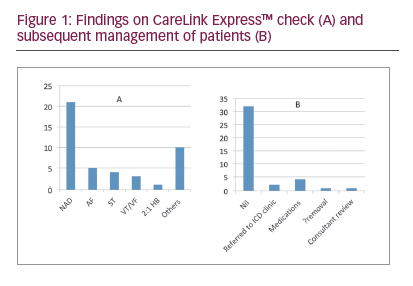