Methods: We carried out a retrospective review of 116 NIDCM patients implanted with an ICD or CRTD at a single tertiary centre between 2010–4. All patients with insufficient follow up data were excluded (transfer of care,
non-attendees, device extractions). Device therapy was defined as appropriate anti-tachycardia pacing (ATP) or shock for ventricular arrhythmias.

Results: Eighty-five patients implanted with an ICD were identified for analysis; 48 (56.5%) for primary prevention and 37 (43.5%) for secondary prevention. The mean age was 64 ± 13 years with predominantly male recipients (61%). Overall, 30 (35.3%) patients received appropriate device therapy. Whilst the rate of appropriate therapy was higher in secondary prevention patients (41% versus 31% in primary prevention patients), this difference was not statistically significant (p=0.374). With majority of ICDs implanted for severe LV impairment, no association was seen between LV function (EF <35%) and device therapy (p=0.259). Although a higher ATP to shock (~3:1), and VT to VF (~7:1) ratios were seen, no significant difference was noted between the two indications (p>0.05). The mean time to first event, and mean total number of events for both groups were 4 years and 1.3, respectively. 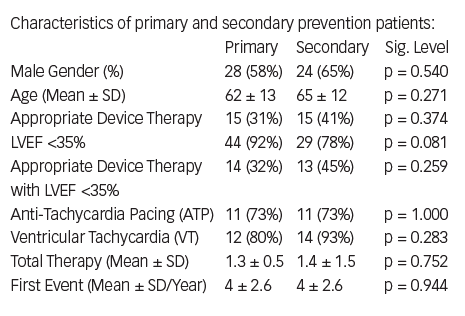 Conclusion: This retrospective analysis demonstrated high rates of appropriate therapy over a 5-year follow-up period. The likelihood of appropriate device therapy was similar in both primary and secondary prevention patients. Our data show higher rates on appropriate therapy in patients with NIDCM than in other recent studies and registries. This could be due to better risk stratification and patient selection or may reflect differences in individual device programming or pharmacological therapy.