Background: Upgrade of cardiac rhythm devices requires the operator to obtain additional venous access to accommodate additional pacing or defibrillator leads. This is conventionally done by either the axillary or subclavian venous route using fluoroscopically guided puncture. An alternative technique is to use venotomy of the cephalic vein under direct vision but this is usually ignored to due to concerns about venous stenoses around existing lead entry points.

Aim: To establish whether the cephalic vein may routinely be used for upgrade of existing CRM devices.

Methods: Personnel, procedural and complication data were extracted from records of all CRM upgrade procedures at St Georges Hospital, London and Royal Surrey County Hospital, Guildford between 1 October 2009 and 30 September 2017. Operators were encouraged to use cephalic access.

Discussion: In the absence of documented previous use of a cephalic vein, in most procedures it is possible to add further leads via the cephalic route. This is widely accepted to be the lowest risk venous access route used in CRM procedures and should not be discounted due to the presence of existing leads. 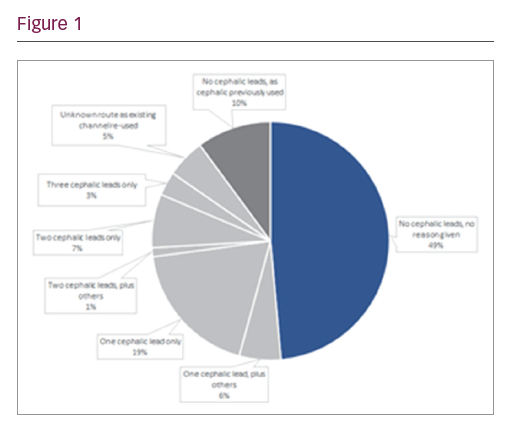