Method: 10 patients (mean age 73.4 years [64–84 years]) with a diagnosis of ICM were recruited over 3 months. 4 patients were classified as high risk and 6 as intermediate risk using the PAINESD score. All patients were on optimal anti-arrhythmic drug therapy: B-blocker (n=10), amiodarone (n=7), mexiletine (n=3). The Ensite Precision Cardiac Mapping System was used to construct substrate maps with the Advisor HD Grid mapping catheter with an average point density of 2,344/26,165 (points used/points collected). Ablation lesions were delivered as per standard protocol: Temperature set to 60°C for an empirical lesion duration of 60 s, or shorter if i) failure to achieve a temperature of 45°C, ii) impedance drop of 15 Ω reached or iii) rising impedance. Metrics recorded during the ablation included time, power, impedance, and temperature, were collected at a rate of 1 Hz. Mapping was performed as per the UHCW VT mapping and ablation workflow with analysis of pre- and post-ablation bipolar and unipolar total scar area (TSA), border-zone area (BZA), dense scar area (DSA), late potential area (LPA), mean bipolar and unipolar voltages of ablation target areas (ATA). Standard VT induction protocols was performed at the end of each procedure. 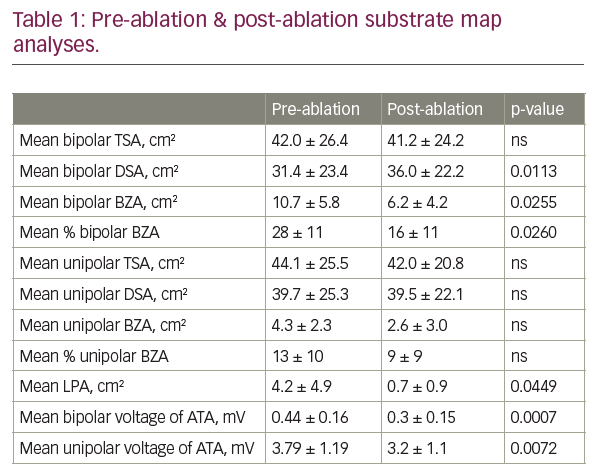 Conclusion and implications: The DTA catheter system resulted in a significant reduction of both mean bipolar and unipolar voltages of the ATA. The average bipolar BZAs and LPAs were significantly reduced with no inducible clinical or non-clinical VT at the end of the tested procedures. This is the first study to report the efficacy and safety of the DTA catheter system in VT ablation, which positively impacts on key substrate ablation targets with consistent on-table endpoint testing outcomes. Further studies investigating both long-term clinical outcomes and performance to comparable ablation technology is required.

The current outbreak of coronavirus disease 2019 (COVID-19), caused by severe acute respiratory syndrome coronavirus-2 (SARS-CoV-2), has developed into a worldwide pandemic affecting millions of lives in one way or another.1 Over the period of 1 year since the disease was first reported from Wuhan, China,2 COVID-19 has infected over 50 million patients and resulted […]

Paroxysmal supraventricular tachycardia (PSVT) defines a group of cardiac arrhythmias where the underlying mechanism is dependent upon structures at or above the level of the atrioventricular node. The recent PRE-EMPT study retrospectively evaluated health records of over 4.2 million people in the USA, estimating PSVT incidence at 73/100,000, and national prevalence at 168/100,000 (translating into […]