Results: 74 procedures were undertaken in 57 patients using the CARTO mapping systems and substrate mapping. 12.1% utilised epicardial access. Aetiologies were ischaemic (ICM) & non-ischaemic (NICM). Procedures increased annually; 8 in 2016 (50% ICM) to 22 in 2020 (68.1% ICM). The NICM cohort included dilated cardiomyopathy, myocarditis, arrhythmogenic right ventricular cardiomyopathy, sarcoid and undifferentiated. ICM predominated over NICM (63.5% vs 36.5%). Median age was 64.15 years (Table 1). Recent/active VT storm represented the primary indication in 58.1% (43) of cases. 60.8% of all procedures were electively undertaken of which recent VT storm was the indication in 31.1%. Where medication data was available for elective cases, 75%, 95.8% and 70.8% were on amiodarone, beta blockers or both, respectively. 48.6% of the cohort were out of area and a significantly higher proportion of these cases were due to VT storm (77.8% vs. 39.5%; p=0.001). 10 procedures (13.5%) did not progress to ablation. Operator-defined procedural success rates were 45.9%, 57.4% and 25.9% for mixed, ICM and NICM, respectively. Major complications, within 30 days of the procedure, occurred in 8 (10.8%) including 2 cardiac tamponades requiring urgent surgical rescue and 1 death (haemorrhagic stroke in cerebral amyloid). Despite higher PAAINESD scores in ICM, no statistical association was found with complications. Of 27 with follow up device data, ICM & NICM had 1 year VT freedom of 51.7% & 47%, respectively. Significant reduction in ATP episodes was seen 1 year post ablation (17.8 v 0.89; p=0.027) with a trend towards reduced shocks (1.8 v 0.16; p=0.68). Amiodarone could be stopped in 47.4%. 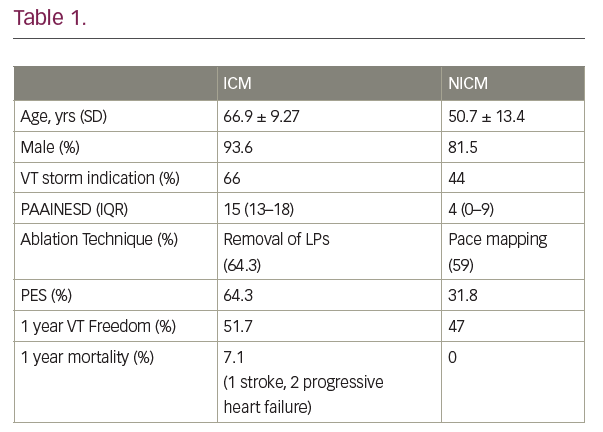 Conclusion: Increasing VT ablation numbers are observed at our centre with the service improving awareness, education with dedicated VT clinics. Higher than expected VT storms were seen suggesting delayed referral from secondary care. Despite being a relatively new service with a high-risk population (VT storm and PAAINESD score), outcomes are comparable to larger scale published work at more established centres, our complication rate are 10.8% with 52.8% of patients experiencing VT freedom for at least 1 year. Coupled with significant reductions in device therapies, the service provides an opportunity for optimisation of patient care serving the local area with gradually rising numbers aligning to NHSE recommendations.