Introduction: Reducing unnecessary and inappropriate implantable cardioverter defibrillator (ICD) therapies reduces mortality. This was demonstrated in studies that investigated using higher rates for treatment zones and longer detection windows. ICDs currently do not utilise haemodynamic measurements to guide therapies. We have previously shown that a potentially implantable sensor can reliably identify loss of perfusion in ventricular fibrillation. It is possible that programming even longer detection windows could further reduce unnecessary shocks; however, it is not known in how many patients this may be beneficial, and the risk with adopting this approach is that appropriate shocks would be withheld for longer than necessary in the presence of reduced coronary blood flow (CBF). A disadvantage of using higher heart rate zones is that slower haemodynamically compromising VTs are left untreated. We investigated the impact of simulated VT on CBF and invasive blood pressure (BP). The aims were to determine whether detection windows could potentially be safely extended in some patients during VT and to identify what proportion of patients poorly tolerate episodes of slower VT.

Methods: We recruited patients undergoing a clinically indicated invasive coronary angiogram. We simulated VT by delivering right ventricular VVI pacing, via a temporary wire. Each patient underwent a randomized ventricular pacing (Vp) protocol (140, 160, 180 and 200 bpm) for a minimum of 30 seconds. During each Vp protocol, continuous 3-lead ECG, invasive beat-by-beat arterial BP and invasive CBF, using a combowire in the mid-left anterior descending artery, were recorded. Significant haemodynamic compromise was defined as a reduction in CBF and/or a sustained drop of 30% in systolic BP (SBP) compared with measurements made during baseline rhythm.

Conclusion: One-third of simulated VT episodes at 200 bpm were haemodynamically well tolerated. This suggests VT detection windows could potentially be safely extended, with the aim of reducing unnecessary therapies in a significant number of VT episodes. In contrast, many episodes of slower VT were poorly tolerated, implying that therapies may be beneficial. Thus, ICD programming could be further optimized with haemodynamically guided therapies compared with currently used methods, which exclusively rely on the electrogram. 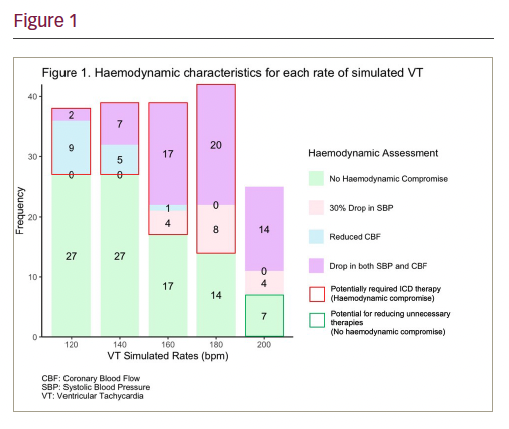