Introduction: Cardiac resynchronisation therapy (CRT) can reduce morbidity and mortality in patients with left ventricular impairment and dyssynchrony. Elderly patients receiving CRT are less often studied. CRT implantation in elderly patients can be technically demanding and pose extra challenges. They may tolerate lengthy procedures less well and may be more severely affected by pneumothoraces. The use of solely cephalic access is associated with a lower pneumothorax rate, but this route is not conventionally used due to concerns regarding technical difficulty and the size of the vein. These concerns are exacerbated in elderly patients.

Aim: To evaluate whether CRT implantation, particularly using solely cephalic access, is safe, practical and efficient in a nonagenarian population

CRT implantation was successful in 100% of patients. All procedures had been performed with the intention of implanting all leads via the cephalic vein, and this was achieved in 26 procedures (74.3%). Mean procedure time was 108.5 minutes and mean fluoroscopy time was 14.73 minutes. The majority of procedures (66.7%) of procedures were completed in less than two hours. No complications were noted in any patient. 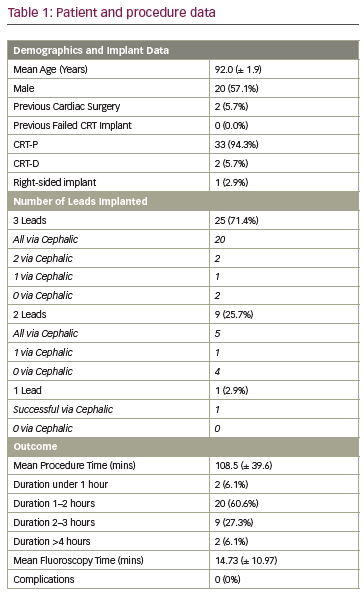