Spontaneously recanalized coronary thrombus (SRCT), also known as honeycomb, lotus root or Swiss-cheese lesion, is an increasingly recognised finding in patients undergoing coronary angiography. It is thought to arise from partial resorption of an initially occlusive thrombus. Most patients present with angina or exertional breathlessness. We describe a case of a 69-year-old patient who presented with ventricular tachycardia and was found to have SRCT in the left anterior descending artery on coronary angiography. Echocardiography and left ventricular (LV) angiography showed an akinetic, aneurysmal, thin-walled LV apex, diagnostic of an old anterior infarct. We highlight the role of optical coherence tomography in making the diagnosis and discuss the available management options of this condition.

Spontaneously recanalized coronary thrombus (SRCT), informally known as Swiss-cheese, honeycomb, lotus root or spiderweb lesion, is an increasingly recognised pathology in patients undergoing coronary angiography. Most patients with SRCT present with angina or angina equivalent.1 We describe a case of SRCT in a patient who presented with ventricular tachycardia (VT) without a previous history of ischaemic heart disease. We discuss the aetiology and management of this condition and highlight the role of optical coherence tomography (OCT) in making the diagnosis.

A 69-year-old lady presented to our emergency department with central crushing chest pain and palpitations. An ECG showed VT at a rate of 170 bpm (Figure 1). She gave a past medical history of paroxysmal atrial fibrillation, for which she was on warfarin, and a cerebrovascular accident 3 years ago, which left her with a fixed flexion deformity in the right arm and expressive dysphasia. She denied any past history of myocardial infarction or chest pain. She consumed 20 units of alcohol per week and smoked 20 cigarettes per day. Her medications on admission were warfarin and citalopram. Blood tests were unremarkable, apart from a raised high sensitivity Troponin-T at 594 ng/L.

Despite the VT, the patient was haemodynamically stable. She was treated with intravenous (IV) amiodarone (300 mg bolus) and an IV infusion of magnesium sulfate, which successfully cardioverted her to sinus rhythm within 2 hours. A repeat ECG in sinus rhythm revealed T-wave inversion in the anterolateral and inferior leads, as well as loss of R waves in V1–V3, indicative of an old anteroseptal myocardial infarction (Figure 2). Echocardiography revealed a thin-walled, akinetic, aneurysmal apex with overall moderate left ventricular (LV) systolic dysfunction (estimated LV ejection fraction 40%) (Figure 3). No intra-cardiac thrombus was identified. Her warfarin was discontinued and she was started on aspirin, clopidogrel, fondaparinux, bisoprolol and atorvastatin. 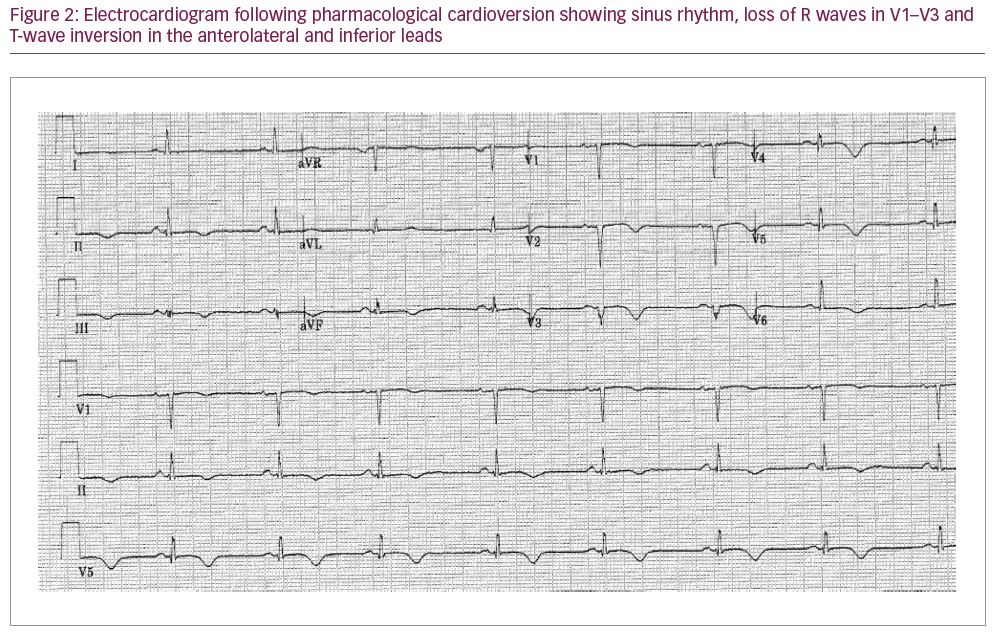 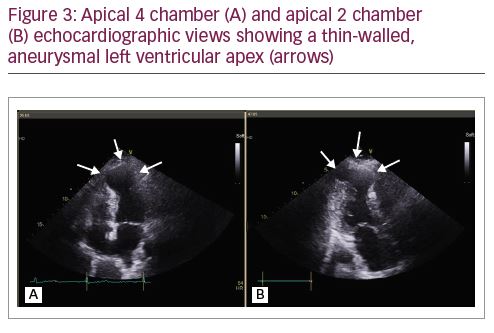 Four days later, she underwent cardiac catheterisation via a left radial approach. LV angiography revealed an akinetic/dyskinetic, aneurysmal apex, severe hypokinesia of the anterior wall and good basal contraction (Figure 4). Selective coronary angiography (Figure 5A–D) revealed mild atheroma in the right coronary artery and no significant disease in the left main stem and left circumflex. The proximal third of the left anterior descending artery (LAD) was mildly diseased. In the middle third of this vessel, there was a long hazy segment with an irregular lumen outline and, in certain projections, a line transecting it along its longitudinal axis, consistent with a chronic healed dissection (Figure 5B–D). The distal third of the vessel was healthy with thrombolysis in myocardial infarction flow grade III. 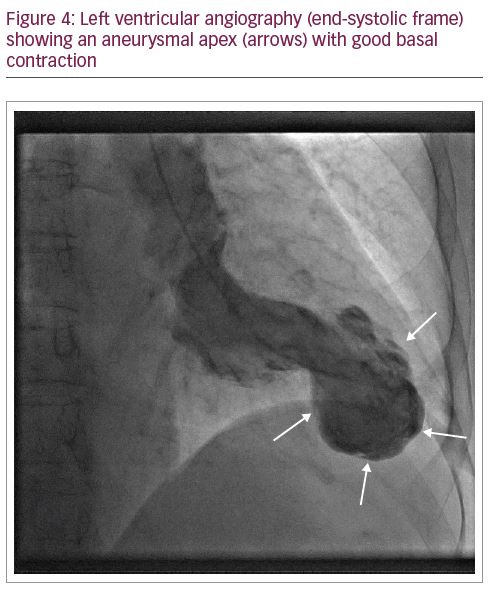 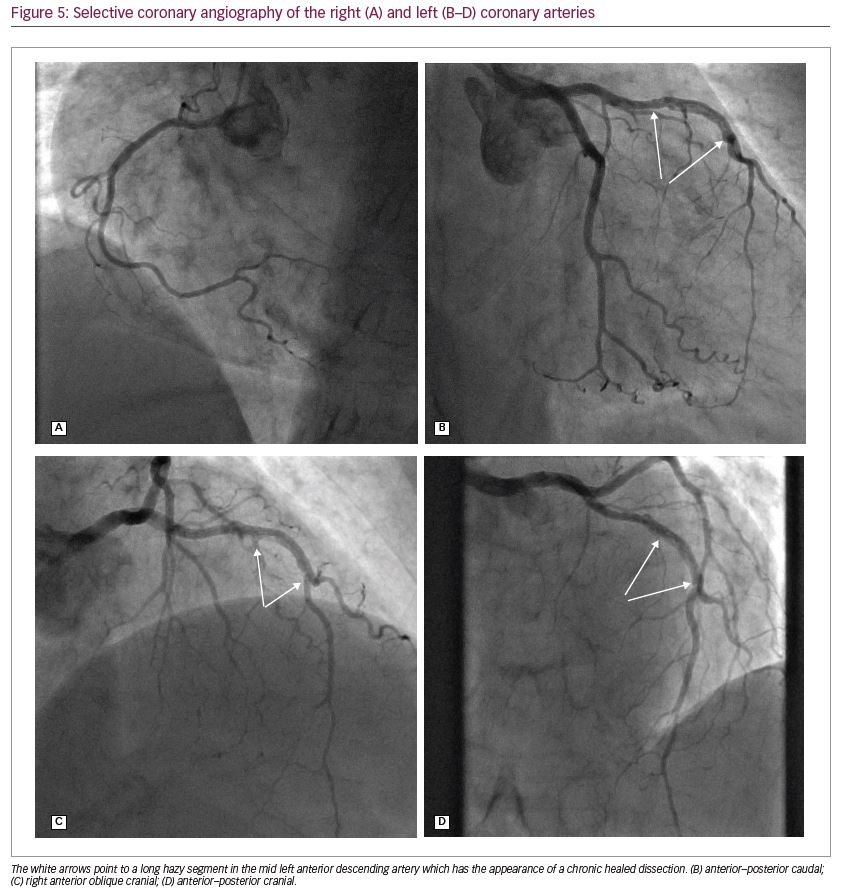 In order to shed further light on this lesion, we proceeded to intravascular imaging with OCT. An IV bolus of heparin (100 units/kg) was administered and the left main stem was cannulated using a 6F JL3.5 guide catheter. A 0.014 Sion Blue guidewire (Asahi Intecc USA, Inc., Santa Ana, CA, USA) could not be advanced past the lesion, but this was successfully achieved using a 0.014 Whisper® MS guidewire (Abbott Vascular, Abbott Park, IL, USA). OCT pullback was performed using a Dragonfly™ OPTIS imaging catheter (St. Jude Medical, St. Paul, MN, USA). This demonstrated a honeycomb-like appearance in the mid LAD, comprised of multiple cavities of various sizes and shapes, separated by thin septa of high signal intensity and low signal attenuation (Figure 6A–F). This appearance is pathognomonic of SRCT. 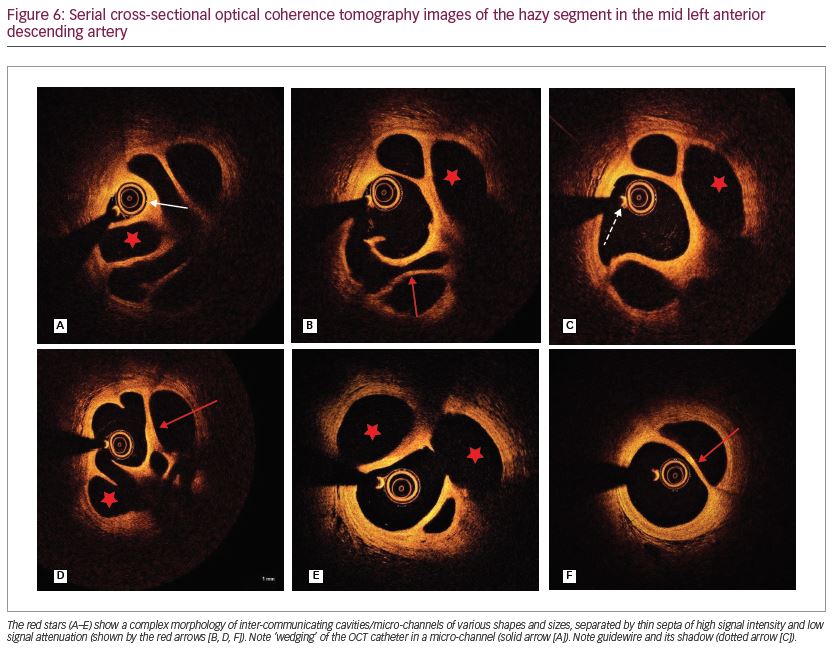 The lesion length was approximately 30 mm as can be appreciated on the longitudinal mode reconstruction (Figure 7). There was no evidence of fresh thrombus or disruption to the intimal layer to suggest coronary dissection or ruptured plaque. Although stenting of the lesion would have been technically feasible, we decided against this given absence of symptoms of chest pain prior to admission, and the likely non-viable nature of the infarcted territory, as suggested by the echocardiography. A cardioverter-defibrillator was implanted 4 days later and she was discharged home the following day on lifelong warfarin, clopidogrel, bisoprolol and atorvastatin. She remains well and completely asymptomatic 2 years following discharge. 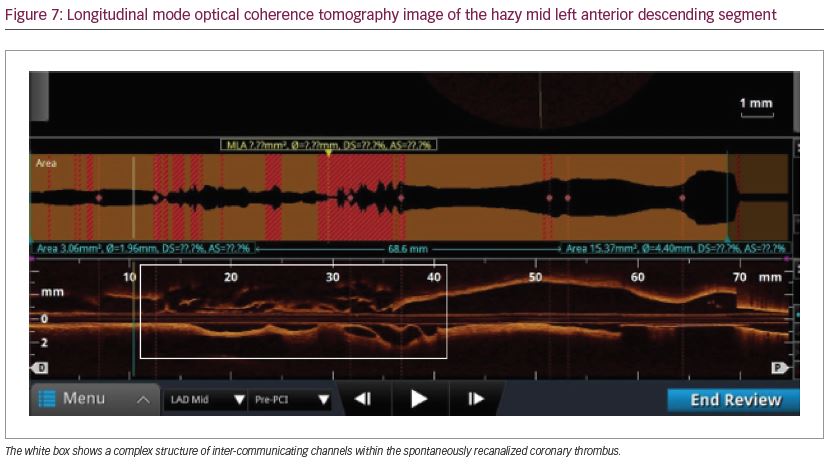 A hazy lesion is commonly encountered on coronary angiography, and may be due to fresh thrombus, calcium, spontaneous coronary dissection, ulcerated plaque or a combination of these. Another increasingly recognised cause is a partially recanalized, organised coronary thrombus, as exemplified by the present case. When an occlusive thrombus forms within a vessel (perhaps as a result of plaque rupture or spontaneous dissection), it may remain occlusive long-term (i.e., forms a chronic total occlusion), or may undergo partial resorption over weeks to months, forming a highly complex structure of inter-communicating pockets and channels, separated by thin fibrotic septa. These partially recanalized thrombi are a common finding in autopsy studies of patients who die of coronary thrombosis, with one series reporting them in up to 40% of cases.2

To our knowledge, this is the first case report of SRCT presenting as VT. We believe the chest pain that triggered the patient’s admission to hospital was secondary to the VT, which in turn was related to scar tissue from an old anterior infarct. This is suggested by the echocardiographic finding of an akinetic, aneurysmal and thin-walled LV apex. The initially occlusive LAD thrombus is likely to have recanalized partially and gradually over time, culminating in the formation of SRCT. We opted to manage the lesion conservatively, given lack of anginal symptoms prior to admission and the unlikely presence of viable myocardium, or indeed reversible ischaemia, within the infarcted territory.

When visualised by OCT, SRCT lesions have been variably described as honeycomb, lotus root, Swiss-cheese or spiderweb in appearance because of obvious resemblance to these structures (Figure 8A–C). The number, shape and size of channels, cavities and septa within these lesions are highly variable, and this is reflected in a wide range of stenosis severity, as seen on coronary angiography and/or OCT.3 Angiographically, SRCT is most commonly mistaken for a chronic healed dissection because of the longitudinal lines that transect it as dye travels through the microchannels. In the largest reported case series of SRCT confirmed on OCT, Souteyrand et al. described three distinct angiographic appearances: braided, pseudo-dissection and hazy, with the braided type (multiple linear and/or interlaced structures) being most common.3 However, the clinical utility of this classification is unclear given equivalent clinical outcomes for all three types following percutaneous coronary intervention (PCI).3 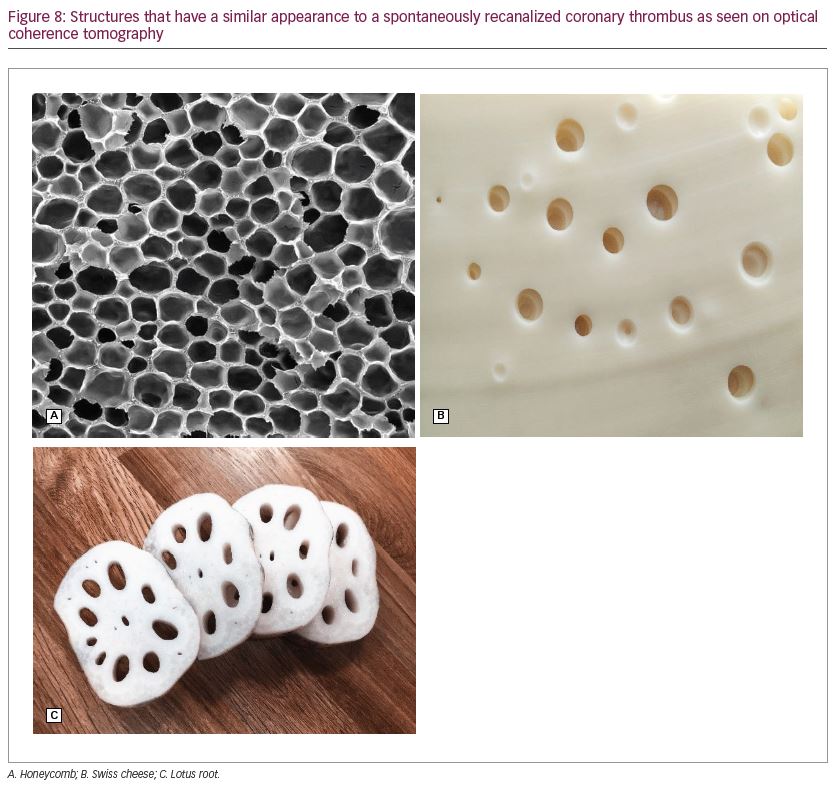 SRCT has been described in all major epicardial coronary arteries, including, very occasionally, in more than one artery in the same patient.4 The majority are thought to arise from in situ thrombosis, but recanalization of an embolic thrombus has also been described.5 An embolic origin is quite plausible in the present case, given a past history of paroxysmal atrial fibrillation and cerebrovascular accident, and absence of significant coronary artery disease on angiography.

The need for PCI to SRCT should be guided not only by the angiographic severity of the lesion, but also the presence of symptoms and/or evidence of reversible myocardial ischaemia. Reliance on angiographic severity alone to judge the need for PCI is misleading, given poor correlation with symptomatic status. Souteyrand et al. found that the stenosis severity of SRCT on quantitative coronary analysis varied between 11 and 100%, yet all patients were symptomatic with angina/dyspnoea and/or had evidence of reversible myocardial ischaemia on functional testing.3

Given their highly complex morphology, one might anticipate technical difficulty in negotiating SRCT lesions with guidewires, balloons, stents or intravascular imaging devices. In the present case, there was some difficulty wiring the lesion, but the subsequent advancement of the OCT catheter was accomplished easily. Similar technical difficulties have been reported by some,6 but not all operators.3

The acute procedural results following stent implantation in SRCT appear favourable, with one case series reporting no malapposition, under-deployment or edge dissection on post-stenting OCT.3 Treatment of these lesions with drug-eluting stents, drug-eluting balloons and bioresorbable scaffolds has been described, with generally favourable short- and long-term outcomes.7 One case series, however, reported an increased risk of side branch compromise associated with worse clinical outcomes following stenting of these lesions.8

The present case highlights the role of intravascular imaging in elucidating the nature of an angiographically hazy coronary lesion. In this regard, OCT is superior to intravascular ultrasound (IVUS), given its higher spatial resolution (10 µm versus 100 µm for IVUS) and near-histological image quality.9,10 Furthermore, good image quality can be achieved safely with OCT, despite the OCT catheter occluding the channel it traverses in many cases.3

With full characterisation of an ambiguous coronary lesion, OCT can guide the next step in management. For instance, a hazy lesion due to thrombus may require adjunctive use of thrombus aspiration ± IIb/IIIa receptor antagonist prior to stenting, whereas a heavily calcified lesion may require aggressive preparation with
non-compliant balloon pre-dilatation and/or use of specialised devices, such as cutting balloons, scoring balloons, rotational atherectomy or intravascular lithotripsy.11 Demonstration of a spontaneous coronary artery dissection, on the other hand, suggests conservative management as the most appropriate strategy, given that most such lesions heal spontaneously.12,13

SRCT is a rare, but increasingly recognised pathology that may present with angina, exertional dyspnoea or, as described in the present case, VT. The diagnosis requires intravascular imaging for confirmation as multiple other pathologies give a similar appearance on coronary angiography. Given its high resolution and near-histological image quality, OCT is the intravascular imaging modality of choice for elucidating the cause of an angiographically hazy coronary lesion. While the exact aetiology of SRCT remains poorly understood, its management depends on the presence of symptoms and/or demonstration of reversible myocardial ischaemia on stress testing. If neither is present, a conservative approach is reasonable, as shown in the present case.

Jie Man Low, Noah Kimit, Rizwan Rashid and Magdi El-Omar have no financial or non-financial relationships or activities to declare in relation to this article.

Informed consent was obtained from the patient described in this case study.