Norbert Guettler, Kim Rajappan and Edward Nicol have nothing to disclose in relation to this article.

Atrial fibrillation (AF) is one of the most common arrhythmias. It affected 33.5 million people worldwide in 2010, a number that is expected to double by 2050.1 AF prevalence increases with age, and approximately 25% of individuals aged 40 years or older will develop AF during their lifetime.2,3 Irrespective of age, AF incidence also increases with diabetes and hypertension.4 The relationship between AF and cerebrovascular events (such as cerebrovascular accident or stroke and transient ischaemic attack), and the increased risk of developing cognitive impairment and dementia, in these patients are well described.1,5–7 Recent data suggest that AF may be associated with dementia independent of cerebrovascular events. Possible mechanisms include silent cerebral ischaemia caused by cerebral hypoperfusion and cerebral microhaemorrhage.8 Global cerebral hypoperfusion and transient variability in perfusion in the distal cerebral circulation are caused in AF by R-R interval variability and loss of atrial systole. This results in arteriolar hypotension, capillary hypertension and microvascular dysfunction.9 A recent computational study suggests a rate-dependent impact of AF on cerebral haemodynamics. Higher ventricular rates relate to a progressive increase in critical cerebral events (hypoperfusion and hypertensive events) at the distal cerebral circle.10

Study results indicate that AF probably increases the risk of both vascular dementia and Alzheimer’s disease. The relationship to dementia is probably stronger when AF starts in middle age and with a longer duration of AF.19,20 This article outlines the current evidence regarding the relationship between AF and dementia; possible mechanisms of disease; and potential treatment options for AF, that may decrease the risk of, or progression of, cognitive decline and dementia.

Trials investigating the association of atrial fibrillation and dementia 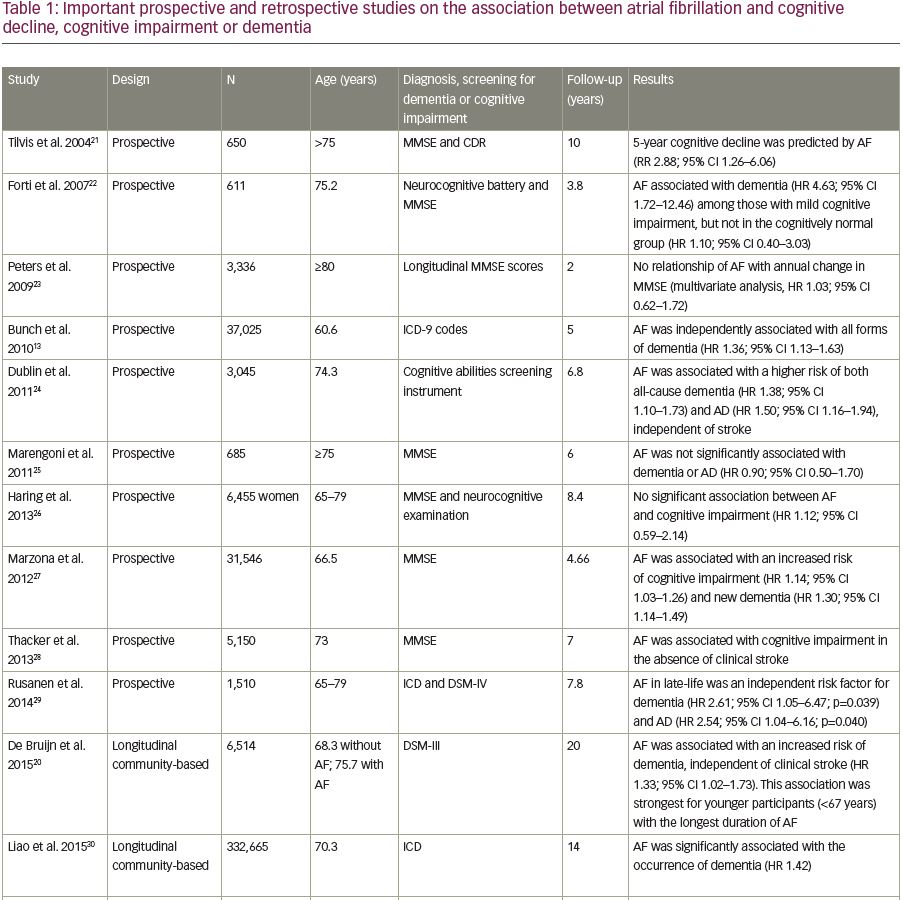 Several meta-analyses and systematic reviews have investigated the association between AF and dementia. A selection of those is listed in Table 3.40–5 A systematic review of three cross-sectional, two case-control and three prospective studies, conducted by Udompanich et al. in 2013, found an association between cognitive impairment and AF. In the cross-sectional studies, patients with AF had a 1.7-fold to 3.3-fold increased risk of cognitive impairment, and a 2.3-fold increased risk of dementia, compared to patients in sinus rhythm.42 Three meta-analyses with prospective and cross-sectional studies have demonstrated an increased risk of dementia in those with AF, with or without a history of stroke.40,41,43 Individuals with a history of stroke were at greater risk for dementia and cognitive decline and a strong association between AF and dementia was demonstrated in patients under 75 years of age. A more recent meta-analysis of 16 observational studies (almost 2.5 million individuals) demonstrated patients with AF had a greater incidence dementia than those without.44

In another meta-analysis of 11 prospective cohort studies covering 112,876 patients, AF was independently associated with dementia incidence.45 A meta-analysis including five prospective observational studies with a total of 61,008 patients and a median follow-up of 12.5 years also indicates an increased risk of dementia in patients with AF.1 According to this meta-analysis, stroke/transient ischaemic attack-independent contribution of AF to dementia is more impactful than stroke/transient ischaemic attack-dependent effect. The association of AF with cognitive impairment and dementia was also evaluated in a meta-analysis including 21 studies.43 In this cohort, there was a significant association between AF and an increased risk of cognitive impairment independent of a history of stroke. The risk of dementia was also significantly increased. 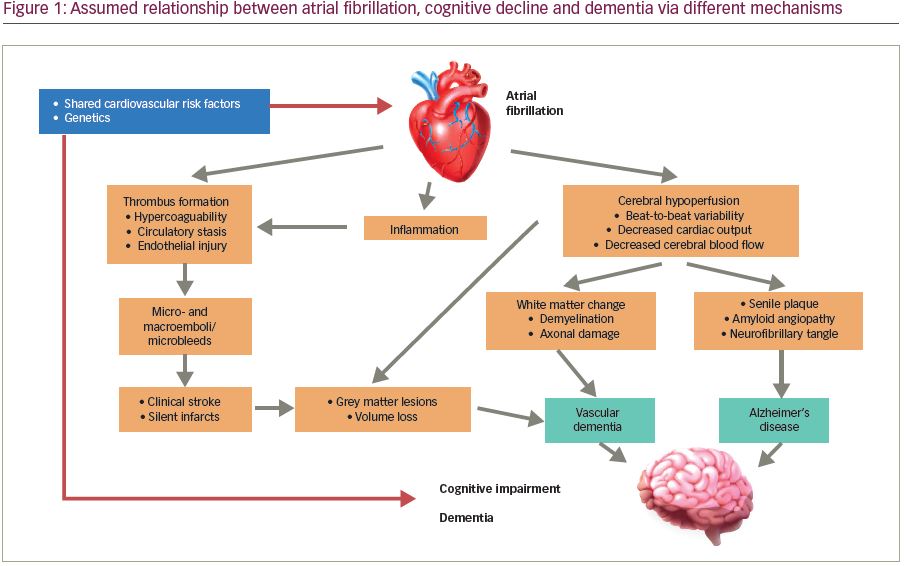 Thus, there is scientific evidence from very large meta-analyses that suggest AF is an independent risk factor for dementia in patients with normal baseline cognitive function not suffering from acute stroke. Screening for dementia in patients with AF, and including dementia as an independent outcome in large AF trials, is required to confirm this association in prospective and clinical practice.45

Possible mechanisms underlying the association between atrial fibrillation and dementia

It is assumed that AF accelerates neuropathological processes that cause and coexist with dementia, such as the development of Lewy bodies, neurofibrillary tangles and hippocampal sclerosis.46 The mechanisms as to how AF leads to dementia are not fully understood, however it is postulated that the main mechanisms are probably cerebral hypoperfusion caused by beat-to-beat variation in AF, with reduced cardiac output, silent cerebral ischaemia (caused by thromboembolism because of a hypercoagulable state), circulatory stasis, endothelial injury, and up regulation of inflammatory processes.47,48

Cerebral hypoperfusion aggravates white matter change leading to demyelination and axonal damage, and subsequent memory impairment.49,50 Cerebral autoregulation maintains blood circulation even if cardiac output decreases, but may deteriorate in patients with long-term AF.51 Long-term cerebral hypoperfusion induces senile plaque formation and amyloid angiopathy through β– and γ-secretases. These generate and aggregate β-amyloid peptide in the brain, which is thought to be responsible for neuronal death and Alzheimer’s disease.52 Cerebral amyloid angiopathy is mainly caused by amyloid β 42 (Aβ42), with Aβ40 triggering a reduction in blood supply within the brain and driving further Aβ production secondary to dysfunction of the vascular smooth muscle.53 Decreased cerebral blood flow can be measured by single-photon emission tomography (SPECT) with 99mtechnetium-ethyl cysteinate dimer, with potential prognostic value in patients with both AF and dementia.54

AF is also associated with a proinflammatory state, but the exact relationship between AF-induced systemic inflammation and dementia requires further investigation.2 A proinflammatory state is implicated in the genesis and perpetuation of AF, facilitating thrombus formation and leading to stroke or silent ischaemia. Inflammatory markers identified in patients with AF and dementia include C-reactive protein, interleukin (IL)-2, IL-6, IL-8, and tumour necrosis factor alpha.12 The role of inflammatory and infectious processes serving as links between AF and Alzheimer’s disease has recently been analysed.57

Genetic analysis reveals that AF-related gene PITX2, the gene for the homeobox transcription factor, is significantly associated with dementia. This genetic factor could explain that the relative risk of dementia is paradoxically higher in younger patients with AF.47,48 A study of 37,025 patients without dementia and a follow-up of at least 5 years showed the highest relative risk (RR) of developing Alzheimer’s dementia among those with AF and younger than 70 years of age.13 A higher risk of dementia in younger patients with AF (<67 years of age) was also seen in a study analysing participants of the Rotterdam Study.20 This shows that the association between AF and dementia is not only caused by age-dependent pathological conditions as common risk factors. The currently assumed relationship between AF, cognitive decline and dementia is summarised in Figure 1. 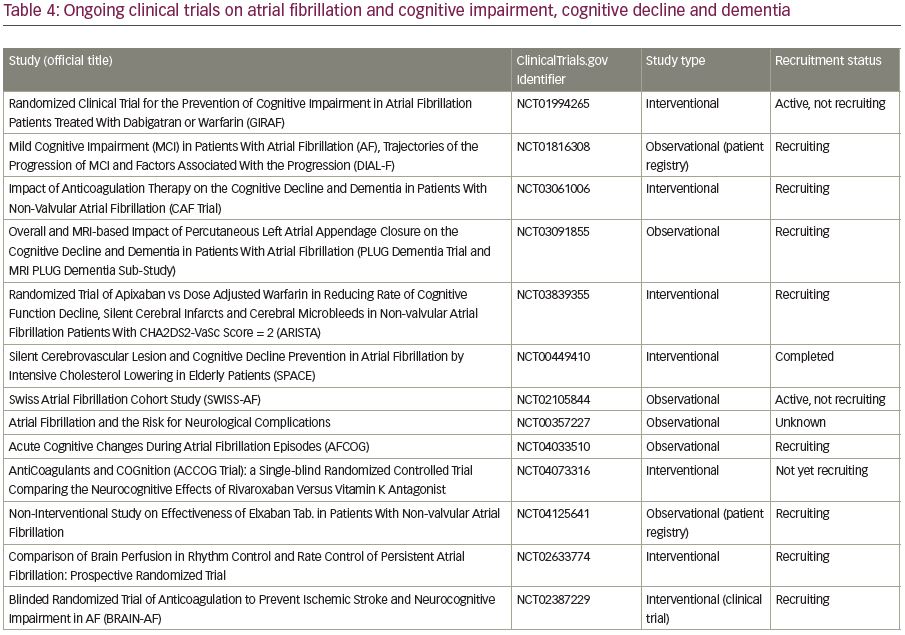 Treatment options for AF are anticoagulation, if indicated, rate control and rhythm control. There is some evidence in the literature that therapeutic options that control rhythm and risk of thromboembolic disease could also have positive effects on cognitive decline and dementia.

Observational trials, such as the Olmsted County population-based study, suggest that anticoagulation of patients with AF with warfarin is associated with reduced cognitive decline.2 However, possible confounders limit confidence in ascribing a cause–effect relationship. The importance of an optimal time in therapeutic range (TTR) was emphasised in this trial. A total of 2,800 patients with AF without dementia were enrolled. Incident dementia was diagnosed in 357 patients (12.8%) over a mean follow-up of 5 years. After adjusting for confounders, warfarin therapy was associated with a reduced incidence of dementia (hazard ratio [HR] 0.80; 95% confidence interval [CI] 0.64–0.99). However, only those in the two highest quartiles of TTR were associated with a lower risk of dementia. The importance of TTR for a positive effect of anticoagulation with vitamin K antagonists was also reported in two other studies.58,59

A systematic review of 19 studies analysed the association between cognitive impairment and anticoagulation.60 The pooled odds ratio (OR) suggested no association with incident dementia, when comparing anticoagulation with antiplatelet therapy (two studies, OR 1.23; 95% CI 0.80–1.91) or no treatment (three studies, OR 0.89; 95% CI 0.47–1.69). Thus, this review did not show definitive evidence of cognitive benefit or harm from anticoagulation. Direct oral anticoagulants (DOACs) have also been evaluated with regards to their impact on new-onset dementia and compared with warfarin. In a propensity-matched analysis, the risk of developing stroke, transient ischaemic attack or dementia was 43% lower in patients treated with DOACs compared to warfarin. But this difference was not statistically significant (HR 0.57; 95% CI 0.17–1.97; p=0.38).61

In a Danish nationwide cohort study including 33,617 patients with AF with a mean follow-up of 3.4 years, no clinically meaningful difference in dementia development between users of DOACs and warfarin was found.63 Relative to warfarin users, dementia rates were non-significantly lower among DOAC users aged 60–69 years (HR 0.92; 95% CI 0.48–1.72) and DOAC users aged 70–79 years (HR 0.86; 95% CI 0.68–1.09), whereas DOACs were associated with significantly higher dementia rates in patients aged ≥80 (HR 1.31; 95% CI 1.07–1.59). According to the authors, the latter may relate to residual confounding from selective prescribing and unobserved comorbidities.

In summary, there is indirect evidence that effective anticoagulation in patients with AF reduces the risk of cognitive impairment and dementia. Large prospective clinical trials on this subject are needed.

Further ongoing clinical trials on the association between AF, cognitive impairment, cognitive decline, and dementia are summarised in Table 4.

AF can be regarded as an independent cardiovascular risk factor for the development of cognitive decline and dementia. Several recent studies suggest an association between AF, cognitive impairment, cognitive decline, and dementia, in those both with and without a history of stroke. AF increases the risk of vascular dementia as well as Alzheimer’s disease. Both types of dementia and AF share the same risk factors, including hypertension, heart failure, diabetes, dyslipidaemia, age, obesity and physical inactivity. These risk factors, alone or in combination, can lead to silent strokes and microbleeds, as well as chronic cerebral hypoperfusion, which are more common in patients with AF than in patients in sinus rhythm. The association between AF and dementia is strongest in patients <65 years of age.

Anticoagulation, either with vitamin K antagonists or DOACs, has been proven to be effective in preventing strokes in AF and there is emerging evidence that anticoagulation in patients with AF could also be effective to reduce cognitive decline even in those without a history of stroke. This, however, still needs to be proven in ongoing and future clinical trials.