Introduction: There are numerous approaches to treating Atrial Fibrillation (AF) using catheter ablation therapy. These approaches still require optimisation, with 41% of persistent AF patients reverting to AF 18 months after receiving pulmonary vein isolation (PVI). We aimed to use a virtual cohort of patient-specific left atrial models to compare ablation techniques targeting the anatomical, structural and electrical substrate of AF. We also wanted to investigate which factors are important for predicting simulated ablation response.

Results: Acute response to ablation was classified as AF (non-responders) and AT (atrial tachycardia) or termination (responders). The optimal ablation approach resulting in termination, or if not possible AT, varied among the virtual patient cohort: 20% PVI alone, 6% box ablation, 46% all driver hotspots, 4% all fibrosis areas, 2% single driver hotspot and 2% single fibrosis area. 20% of the virtual patients were non-responders to all 6 ablation approaches. The accuracy of classifier predictions improved from 0.73 to 0.83 by incorporating patient-specific and ablation pattern specific metrics, rather than simply including ablation type.

Conclusion: Patient anatomy, patient-specific fibrosis properties and driver site locations are all important in determining individual AF mechanisms. The improvement in random forest classifier accuracy with the incorporation of patient-specific and ablation pattern specific metrics highlights the importance of these factors in predicting ablation success. When planning the approach for catheter ablation therapy and predicting acute response, these factors and the distribution of lesions must be considered. 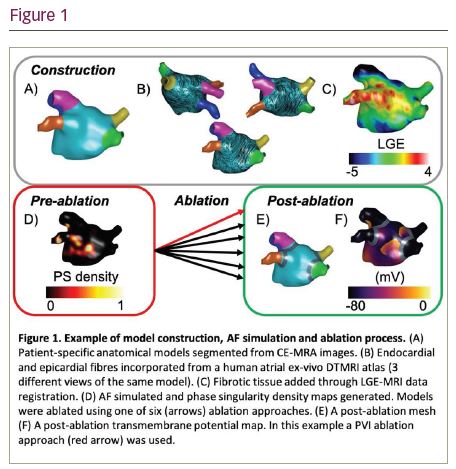