Introduction: In post-cardiac surgery patients, potassium (K+) supplementation is often given to maintain serum levels in the high-normal range, with the aim of preventing atrial fibrillation (AF). Evidence for this practice is poor and the strategy is associated with risks and costs. In future, we intend to perform a properly-powered, non-inferiority, randomised controlled study in this group (the TIGHT K study) comparing serum K+ level maintenance within the normal range versus high-normal level maintenance (current practice). As planning for this, we undertook a feasibility study, as follows.
Methods: Two cardiac surgery units in London. We planned to recruit 160 adults undergoing isolated coronary artery bypass grafting (CABG) without known AF within 6 months. Primary outcome measure in the future full study will be incidence of AF. Patients were randomised (1:1) to protocols aiming to maintain serum K+ either ≥3.6 mEq/L (“relaxed” control) or ≥4.5 mEq/L (“tight” control). Treatment period lasted after surgery up until 120 hours, hospital discharge (if earlier) or until a first episode of AF occurred. Study registered with ClinicalTrials.gov (NCT03195647).
Primary outcomes were feasibility of patient recruitment and randomization, maintaining protocol violation rate <10%, and retaining 90% patient follow up 28 days post-surgery. This feasibility study was not powered to detect differences in between the treatment groups.
Results: One hundred and sixty patients recruited between August 2017 and April 2018, two months longer than planned. Of 601 screened patients, 24% were recruited, 48% were eligible but not recruited and 27% were ineligible. Randomisation was acceptable and successful in all patients (n=81 ”relaxed” arm, n=79 ”tight” arm).
Mean age was 66.2 and 65.5 years in the tight and relaxed arms. Overall, 91.3% were male. One recruited patient was too unwell to undergo CABG and two withdrew consent prior to surgery. Figure 1 shows the protocol was successfully instituted with a difference in serum K+ between the groups. In the tight arm, there were 164 (10.5%) serum K+ measures <4.5 mEq/L when supplementation was not given. In the relaxed arm, there were 87 (6.5%) K+ measures ≥ 3.6 mEq/L when supplementation was given inappropriately. Follow-up 28 days after surgery was 92.5% and 97.4% in the tight and relaxed arms. Fewer K+ measurements were taken in the relaxed arm (1,329 versus 1,557 samples).
Incidence of new onset AF was n=30 (37.5%) and n=28 (36.4%) in the tight and relaxed arms.
Conclusions: Using a trial protocol to assess the impact of maintaining serum potassium levels either ≥3.6 mEq/L or ≥4.5 mEq/L on the incidence of AF after CABG, it was feasible to recruit and randomise patients with acceptable protocol violations and appropriate follow-up rates. The TIGHT-K study (n=1684) will commence recruitment at UK sites in 2019. 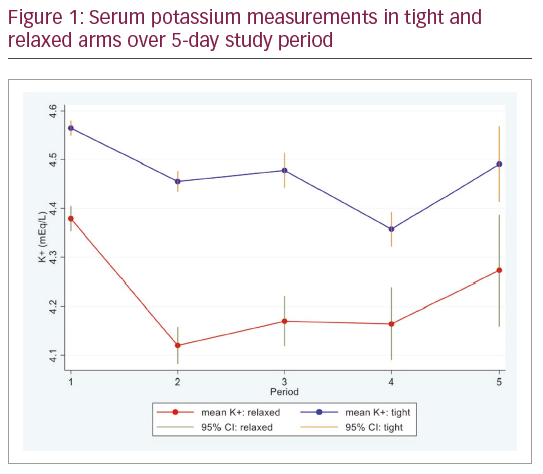