Introduction: Atrial fibrillation (AF) ablation is the most common arrhythmia procedure performed worldwide. The number of AF ablation procedures has increased exponentially over the past decade. This has a significant impact on healthcare resources and cost implications. The aim of this study is to evaluate the efficacy and safety of a same-day nurse led discharge protocol in a district general hospital in patients undergoing AF ablation.

Methods: This was a single centre study of all patients undergoing AF ablation from January 2015 to April 2019 at Eastbourne District General Hospital. All patients were admitted as day case procedures with the intention of same day discharge. Nurses discharged patients in the evening of the procedure if there were no procedural complications and if the effects of sedation had subsided. The primary efficacy outcome was the proportion of successful same-day discharges.

Conclusion: Same day nurse led AF ablation discharge is feasible and safe in the majority of patients. This helps to reduce costs and increase the number of beds available in the hospital trust. Over the study period the proportion of same day discharges increased which is likely due to increased confidence of the nursing staff to discharge patients on the same day and the increased use of cryoablation technology. 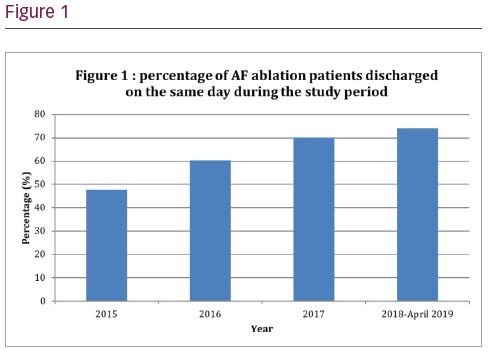