Background: Common cut-offs for dense scar and ‘low-voltage areas’ on atrial 3D electroanatomical mapping are 0.05 mV and 0.50 mV, respectively. These are based upon statistical assessment of left atrial voltages in healthy individuals, rather than physiological assessment and may not fully represent underlying scar compared with unipolar readings or the novel parameter local impedance (LI).

Methods: Patients undergoing AF ablation were recruited. Ultra-high-density 3D electroanatomical maps of both atria were created in Rhythmia HDx. PTs were assessed using the IntellaNav MiFi and Stablepoint (SP) ablation catheters between the tip and first ring electrodes. With the latter, a contact force of 10 g was targeted. PTs were assessed with a 2 ms pulse duration commencing at 5 mA and moved up or down accordingly. Sites without capture had PT recorded at the maximum tested 20 mA. LI was referenced against a blood pool reading (LIr) and analysed separately for MiFi and SP catheters. EI sites were defined as no pacing capture, PA capture between 5–20 mA and EA less than 5 mA. As no previous work has defined a PT to determine underlying atrial scar, a level was sought that would reflect EA tissue with consistently low PTs and PA tissue with significant variation in PTs. 5 mA was selected after review of data on scatterplots. Receiver operator and precision recall curves were plotted to define cut-offs.

Conclusions: PTs suggest LIr is a superior marker in assessing electrical viability of atrial tissue over conventionally used voltage cut-offs. Based on pacing capture data, what has previously been labelled dense scar is not electrically inert and should be ablated if clinically indicated. Values of 0.03 mV and 1.86 mV, and for potential future LIr mapping, 1Ω and 13Ω are suggested as dense scar and low voltage area thresholds. ❑ 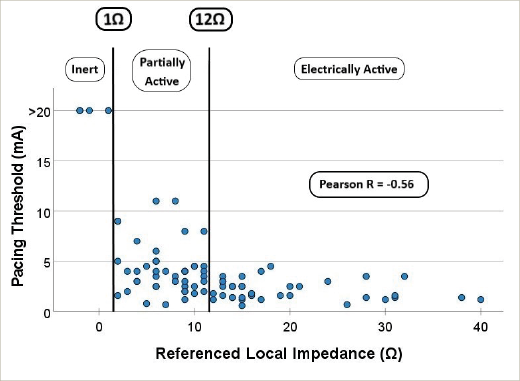