Introduction: The T-type calcium current (ICaT) is down-regulated in atrial fibrillation and may be involved in its pathogenesis. Previous attempts to target ICaT pharmacologically have been limited by lack of compounds that specifically antagonise the T-type compared with the L-type. In recent years new compounds have been developed that both open and block the membrane channels that facilitate ICaT and are reported to have improved T-type specificity. The novel compound Z944 has good T-type specificity in primary murine atrial myocytes and may have utility in the treatment of atrial fibrillation. This work investigates the effect of this compound on the murine action potential as any effect is likely to be atrial specific given the lack of T-type expression in healthy ventricle.

Methods: Action potentials were recorded from primary wild-type murine atrial myocytes from both atria using the whole-cell ruptured current clamp technique. All animal work was performed according to relevant legislation. Action potentials were stimulated with the injection of 500 pA of positive current for 5 ms following an S1-S2 protocol. Baseline cycle length was 250 ms with the S2 interval starting at 250 ms and reducing to 40 ms in 15 ms steps. Action potentials were recorded under controlled conditions, in the presence of 1 uM Z944 and following wash of the compound. The action potentials recorded following S2 were analysed using Matlab (MathWorks Inc). The time taken for 30, 50 and 90 percent repolarisation (APD30, APD50 and APD90) were determined for each action potential. A mixed effects model was used to assess the effect of Z944 on action potential duration (APD). As previous diastolic interval (DI) and resting membrane potential (Rm) also effect APD, these were both added as co-variates in the model.

Conclusions: Selective block of the T-type calcium current with Z944 leads to an increase in APD in murine atrial myocytes. The mechanism for this effect has yet to be determined and warrants further investigation. Given the pharmacology of Z944 and the lack of T-type current in healthy ventricle, the effect would be expected to be atrial specific. There is therefore the potential for Z944 to have utility in the management of atrial arrhythmias without the troublesome ventricular pro-arrhythmic effects that plague many other compounds. ❑ 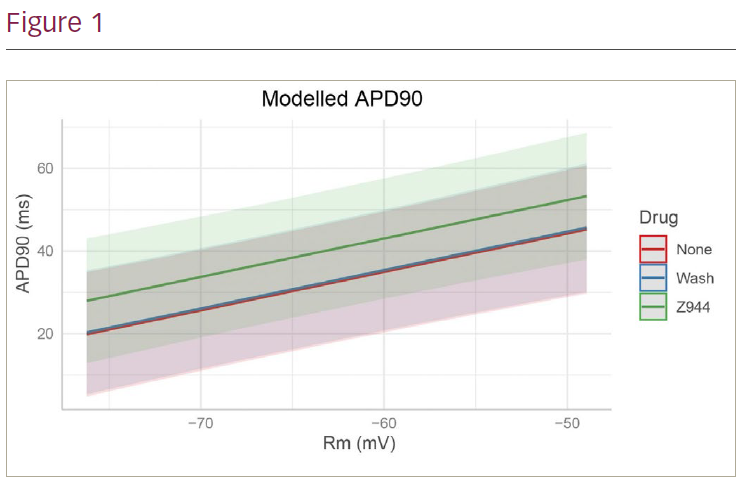