Introduction: Atrial fibrillation (AF) is a common arrhythmia in the intensive care setting. Observational studies of patients who develop new-onset AF during critical illness have demonstrated an increased risk of recurrence and increased morbidity and mortality, in both the short and long term, related to thromboembolic stroke and heart failure.

Patients with new-onset AF on the intensive care unit (ICU) were identified to determine if clinicians made decisions regarding long term anticoagulation and made robust follow-up plans on discharge. This prompted a further quality improvement project to address deficiencies identified in the patient pathway.

Methods: A retrospective audit of patients on the ICU was performed spanning a 6-month period. Patients who triggered an arrhythmia alert on the PICIS software were identified and cross-checked with patient records to identify instances of new-onset AF (n=14). Clinical records, discharge summaries and echocardiogram requests were reviewed. Analysis revealed the following:

A multi-faceted approach was devised using quality improvement (QI) methodology, aimed at improving communication and care continuity. This consisted of implementation of a “new-onset AF proforma”, amendment of the ICU discharge summary template to include a specific entry for new-onset AF and educational initiatives for doctors and nursing staff. A repeat PDSA cycle refined the proforma to promote repeat assessment of stroke and bleeding risk post discharge from ICU and the incorporation of a routine pathway for triage and follow up via the arrhythmia nurse specialist.

Results: Patients with new-onset AF who survived to discharge were captured over a 3-month period (n=8). Improvement was noted in documentation of new-onset AF on the ICU and hospital discharge summaries (100% and 88% respectively). All patients captured on the “new-onset AF proforma” were risk assessed in terms of stroke and bleeding risk. Long term anticoagulation was commenced in 88% of patients in whom the discharging team deemed it appropriate (according to stroke and bleeding risk). All patients had echocardiograms while in hospital for non-AF pathologies, precluding the need for an
outpatient echocardiogram.

Conclusion: This QI project has successfully improved the long-term management of patients with new-onset AF on ICU, in particular enhancing rates of anticoagulation prescribing on discharge. This cohort of patients are frequently overlooked as they transition from ICU to the ward to the community and these simple interventions have the potential to improve patient outcomes and continuity of care. 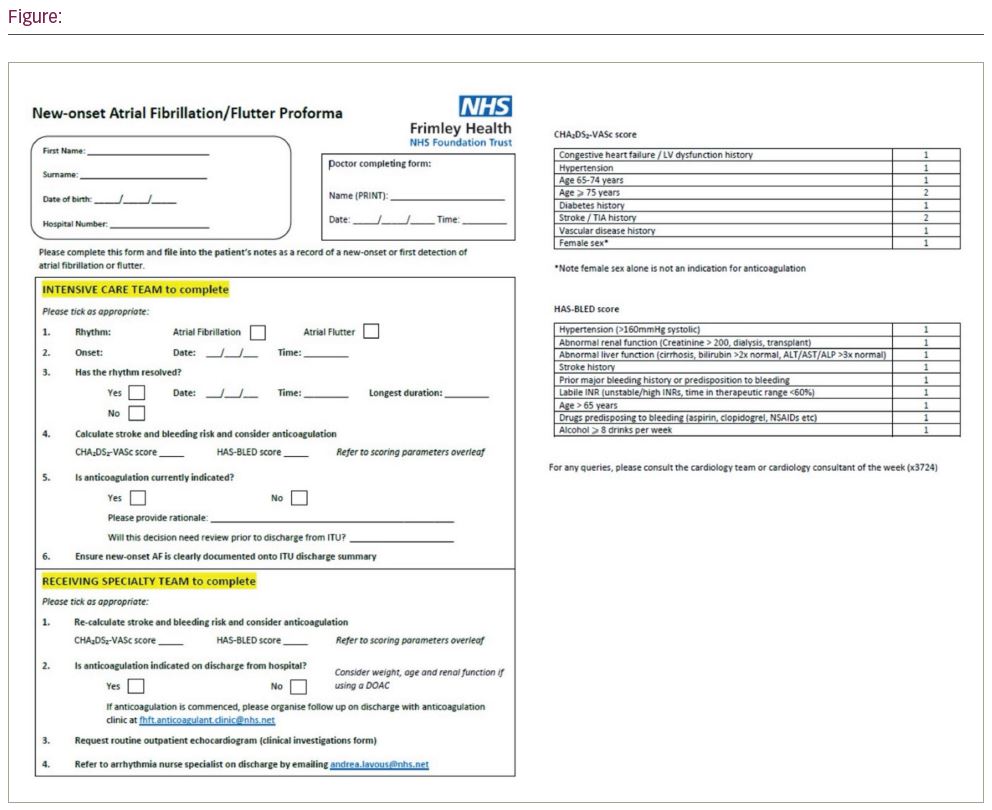