Introduction: Surgical “Maze” was first performed in 1987, although techniques have evolved since then. The most recent 2017 Expert Consensus Statement on Catheter and Surgical Ablation of Atrial Fibrillation (AF) recommends concomitant ablation for symptomatic AF alongside other cardiac surgery (Class I/IIa) and standalone ablation (Class IIa) for persistent and long-standing persistent AF. We sought to evaluate the contemporary performance of surgical ablation at our centre.

Methods: Retrospective electronic database and case note review at a single tertiary centre, including all operations involving surgical AF ablation between January 2016 to December 2018. A 90 day “blanking period” was allowed post op.  Of 278 patients initially identified, 94 were excluded as there was no follow up after initial clinic visit 90 days post-surgery. Follow up was for minimum 6 months, median 12 months. Cardiac rhythm was determined on 12 lead ECG pre-op and during post op follow up by Holter monitor and/or 12 lead ECG.

Conclusions: These data confirm excellent “real world” outcomes from surgical ablation in a cohort of mainly persistent AF patients, despite advanced atrial myopathy based on left atrial size, coexistent valve disease and comorbidity. The limitations are in its retrospective nature, involving a heterogeneous population and surgical lesion sets, with inconsistent use of Holter monitoring during follow up. 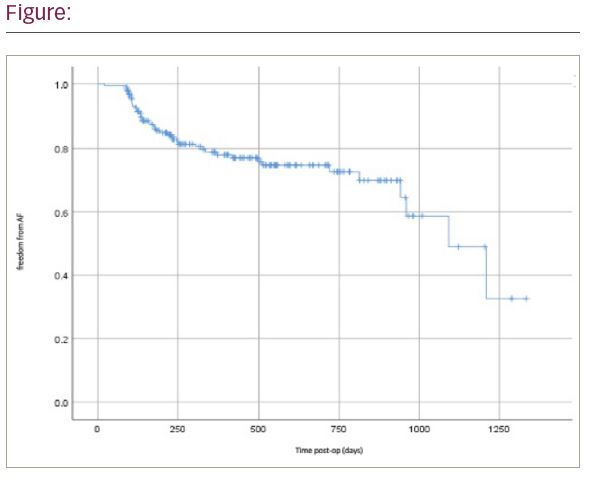