Endothelial dysfunction has been associated
with premature vascular disease. There is
increasing data that N-acetyl-cysteine (NAC)
may prevent or improve endothelial dysfunction.
The aim of this study was to assess the
effects of NAC on endothelial function in
patients with type 2 diabetes mellitus, a population
at high risk for endothelial dysfunction.
Twenty-four patients with diabetes mellitus
were assigned randomly to initial therapy with
either 900 mg NAC or placebo twice daily in a
double-blind, cross-over study design. Flowmediated
vasodilation (FMD) of the brachial
artery was assessed at baseline, after four
weeks of therapy, after a four-week wash-out period, and after another four weeks on the
opposite treatment. Plasma and red blood cell
glutathione levels and high-sensitivity C-reactive
protein (CRP) were measured at all four
visits. At baseline, FMD was moderately
impaired (3.7±2.9%). There was no significant
change in FMD after four weeks of NAC
therapy as compared to placebo (0.1±3.6% vs.
1.2±4.2%). Similarly, there was no significant
change in glutathione levels. However, median
CRP decreased from 2.35 to 2.14 mg/L during
NAC therapy (p=0.04), while it increased from
2.24 to 2.65 mg/L with placebo. No side effects
were noted during the treatment period. In
this double-blind, randomized cross-over
study, four weeks of oral NAC therapy failed to
improve endothelial dysfunction in patients
with diabetes mellitus. However, NAC therapy
decreased CRP levels, suggesting that this
compound may have some efficacy in reducing
systemic inflammation.

Reperfusion of infarct-related artery (IRA) in acute ST-elevation myocardial infarction (STEMI) is the procedure with the most clinical benefit in interventional cardiology. However, in around 50% of patients presenting with STEMI, other significant lesions are present, a finding which is associated to a worse prognosis.1,2 Most physicians performing primary percutaneous coronary intervention (PCI) have been trained […] 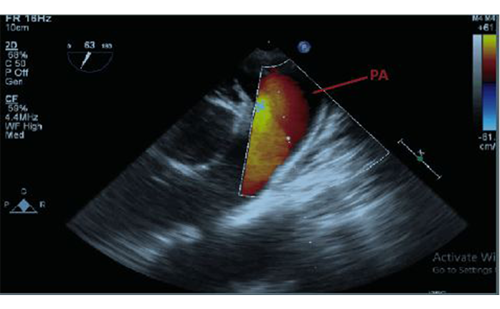 Perioperative management of a mediastinal tumour is an anaesthetic challenge. Echocardiography is not considered as a primary diagnostic modality in the evaluation of a mediastinal mass; however, it can provide valuable information in patients with clinical and diagnostic evidence of cardiac compression or encroachment. Judicious interpretation of perioperative transthoracic or transoesophageal echocardiographic images may be […]

The exact aetiology of coronary artery ectasia (CAE) has yet to be fully elucidated; however, some underlying aetiologies such as atherosclerosis and microvascular abnormalities in coronary arteries have been proposed.1,2 Over the past few years, several inflammatory markers have been introduced as indicators of CAE and its severity. There is an association between the development of […]