Introduction: Emergency out-of-hours destination cardiovascular implantable device (CIDs) insertion has become established as preferable to temporary pacing waiting in anticipation of a working hours procedure slot. A frequent conundrum is the patient who may benefit from a more complex CID such as implantable cardioverter defibrillators (ICD) or cardiac resynchronization therapy (CRT), but who requires immediate pacing. Barts Heart Centre offers out-of-hours emergency complex device insertion where clinically indicated. We aimed to assess the safety of this approach.

Methods: A retrospective analysis of all out-of-hours complex CIDs was performed between June 2015 and May 2019 was performed. An “out-of-hours” case was considered to be a case where start time was after 1700 or before 0800 on weekdays, at weekends or on UK Bank Holidays, and which had been classed as an “emergency” implant. We excluded planned inter-hospital transfers, who were overwhelmingly stable patients, and any out-of-hours elective work.

Results: We identified 766 out-of-hours devices. Of those and after excluding pacemakers, 59 cases fulfilled the inclusion criteria; 24 ICD, 19 CRT-D and 16 CRT-P. Four displaced leads (1 ICD right ventricular lead and 3 CRT-D left ventricular leads) were identified on post-implant check. There were no other procedural complications. In addition, the skin-skin mean procedure time was 93 ± 44 minutes, with 10 ± 9.3 minutes mean fluoroscopy time (Table). Of note, complications, procedure and radiation times were comparable to previously published ranges.

Conclusions: Our experience demonstrates that implantation of emergency out-of-hours complex devices is safe and does not expose patients to higher radiation or procedure times. 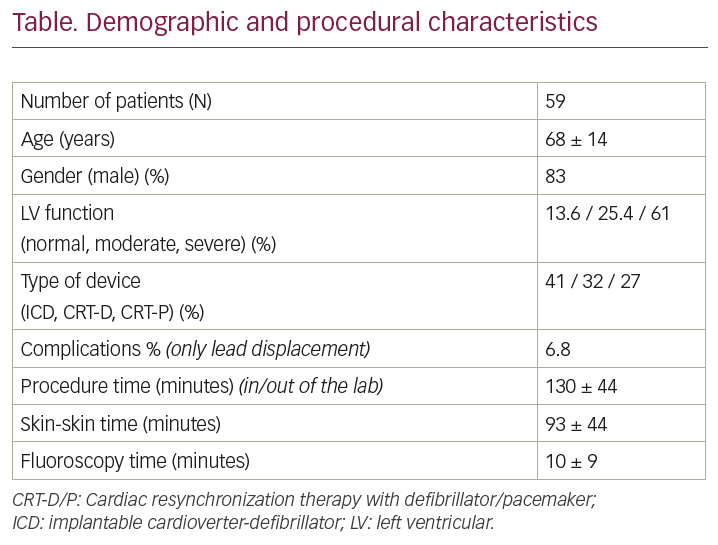