Background: Inappropriate implantable cardioverter defibrillator (ICD) therapy can significantly reduce quality of life and is associated with adverse outcomes. Introduction of generic programming strategies, combing high detection rates and long detection times have shown to significantly reduce inappropriate therapy. Each of the 3 large randomised controlled trials that have informed programming strategies included only a single device manufacturer, with tightly controlled programming parameters in both the active and control groups. Both detection time and lower treatment zone rate varied and no study evaluated combining the most aggressive programming of each parameter. A standardised programming protocol was introduced at our centre in October 2013 with shock reduction programming extrapolated from trials of one manufacturer and applied to across manufacturers.

Objective: In 2017 a series from 4 institutions reported 10 cases where normally functioning ICDs failed to deliver timely therapy for ventricular fibrillation (VF). The authors suggested that complex and unanticipated interactions between manufacturer-specific features and generic programming prevented therapy for VF. The purpose of this retrospective cohort study was to evaluate the evaluate the benefits and safety of generic programming and explore the effect of different detection programming combinations on outcomes.

Methods: We included all new ICDs in a single centre (2009–2019). In 2013 a standardised programming protocol based on generic programming was introduced, incorporating high detection rates (200 bpm for primary prevention) and long detection (30/40 or equivalent in VF zone) for all patients. Patients were classified into three groups based on implant programming: pre-guideline (PS), post-guideline and guideline complaint (GC), and post-guideline but not guideline complaint (NGC). The endpoints were the first occurrence of any device therapy (ATP or shocks) or shock alone, syncope and all-cause mortality. Survival analysis was used to evaluate outcomes. To evaluate the potential impact of combining long detection time and a high lower rate detection zone, we constructed a composite ‘programming’ score, which combined measures of both parameters. The relationship between this composite programming score and study endpoints were evaluated in separate multivariable Cox proportional hazards models, with separate analyses for primary and secondary prevention patients.

Conclusion: In a real-world population, introduction of a standardised programming protocol significantly reduced the burden of ICD therapy without an increase in adverse outcomes. Furthermore, the use of generic programming appeared effective across manufacturers. 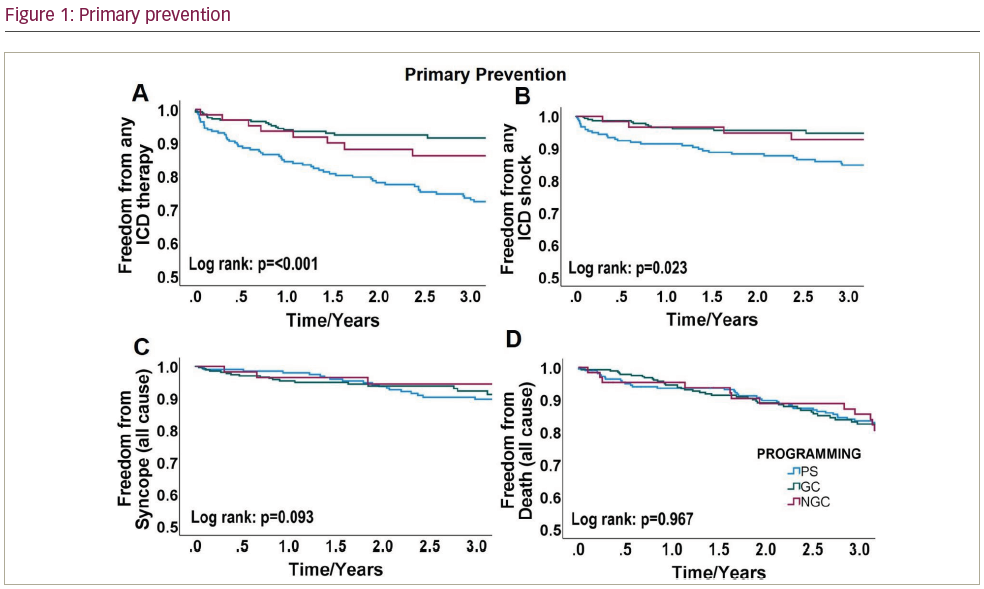