Introduction: Access to the epicardial substrate is often required during scar-related ventricular tachycardia (VT) ablation, either as first approach or following a previous endocardial failure. Epicardial ablation is however far from being a widespread technique among electrophysiology labs, due to the intrinsic complications associated with this technique.

In 2017, we described our initial results using intentional coronary vein exit and carbon dioxide insufflation to facilitate subxiphoid epicardial access for VT ablation. Although this was a single centre experience with a small number of cases, this technique was shown to be feasible and safe. The aim of this multicentre registry was to demonstrate the reproducibility and safety of this approach to assist subxiphoid pericardial puncture in the setting of epicardial mapping and ablation for VT.

Methods: A branch of the coronary sinus (CS) was sub selected using a diagnostic JR4 coronary catheter inside a steerable sheath, via femoral access (Figure 1A). Intentional perforation by means of a high tip load 0.014-inch angioplasty wire was then performed at the distal portion of that branch (Figure 1B). Either a microcatheter or over-the-wire balloon was then passed over this into the pericardial space, allowing up to 200 ml of pericardial CO2 insufflation (Figure 1C). This allowed direct visualization of the anterior pericardial space and facilitated subxiphoid puncture (Figure 1D).

Results: From January 2016 to January 2020, 105 consecutive patients undergoing epicardial access by means of this technique in any of the 16 participant centres were included in the registry. 21 different practitioners have undergone at least one procedure as first operator. Intentional coronary vein exit was achieved in all but 1 patient, whose coronary sinus did not communicate with the right atrium and could not be cannulated. In addition, significant pericardial adhesions were confirmed in 4 patients with previous epicardial ablation and therefore only endocardial ablation was performed.

Significant bleeding (>80 cc) due to intentional coronary vein exit occurred in 5 patients. Two of them had received intravenous heparin prior to perforating the CS branch, whilst in another two the branch had been perforated in a proximal position. No clear cause was identified in the fifth case. Bleeding stopped following administration of protamine in one of the patients who had received heparin, and spontaneously in the remaining cases. There were no other epicardial access complications.

Conclusion: This multicentre registry confirms that coronary vein exit and carbon dioxide insufflation can be safely and reproducibly achieved to facilitate subxiphoid pericardial access in the setting of mapping and ablation of ventricular tachycardia. Given the excellent safety profile and the extremely short learning curve, this approach could contribute to expand the use of epicardial ablation. 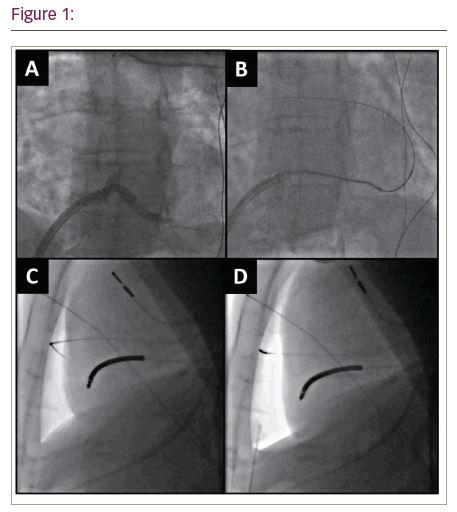