Introduction: Guidelines recommend the implantation of primary prevention defibrillators (pICD) in patients with a left ventricular ejection fraction (LVEF) of <35% due to the associated higher risk of ventricular arrhythmias (VA) in this cohort. However, reported incidence of VA in this cohort is only 5–10%/year with many deaths occurring prior to VA events and up to 2/3 of patients receiving no appropriate intervention over the lifetime of the device. Post hoc analysis of 4 prospective MADIT trials (4,531 patients, 2002–2012) developed a predictive model containing 12 unique variables to assist in patient stratification according to benefit obtained from pICD over a 3-year period. Outcomes predicted included identifying those at the greatest risk of VA or non-arrhythmic mortality without prior arrhythmia (NAM). This was validated on data from the RAID trial (2011-15). We assessed the performance of the MADIT ICD Benefit score on a ‘real-world’ cohort and correlation of the predictive value of each variable.

Methods: We undertook an observational study applying the MADIT ICD Benefit score to consecutive new pICD and cardiac resynchronization therapy defibrillator (CRT-D) implants of ischaemic and non-ischaemic aetiology and LVEF <35% between 2014 and 2019 at a single UK tertiary centre. The primary outcome was first VA or all-cause mortality without prior ventricular arrhythmia (NAM). VA was defined as any treated VA, any sustained VA that was monitored only or ventricular fibrillation. Follow-up data were gathered for a maximum 3-year follow-up period. Kaplan–Meier survival curves separated by MADIT Benefit group were compared for each event. Assessment of each score variable was undertaken with Cox proportional analysis.

Conclusion: The MADIT ICD Benefit score was unable to accurately stratify patients according to arrhythmic or mortality risk. Furthermore, only 4 variables were associated with VA and none with NAM. Our dataset had significant variation to the original training set including a higher proportion of non-ischaemic cardiomyopathy (48% vs 34%, respectively), higher CRT implants (61% vs 40%) and higher rates of atrial arrhythmia (30.3% vs 14%). Despite this, our data are representative of guideline adhered practice. The MADIT ICD Benefit Score was not applicable to our local data. This may be representative of the impact of advancing heart failure management and services on patients, a population change resulting in non-generalisability of a scoring system based on older studies. Additional heart failure medication data are being collected locally for assessment, but larger, multicentre studies would be required to confirm this hypothesis. 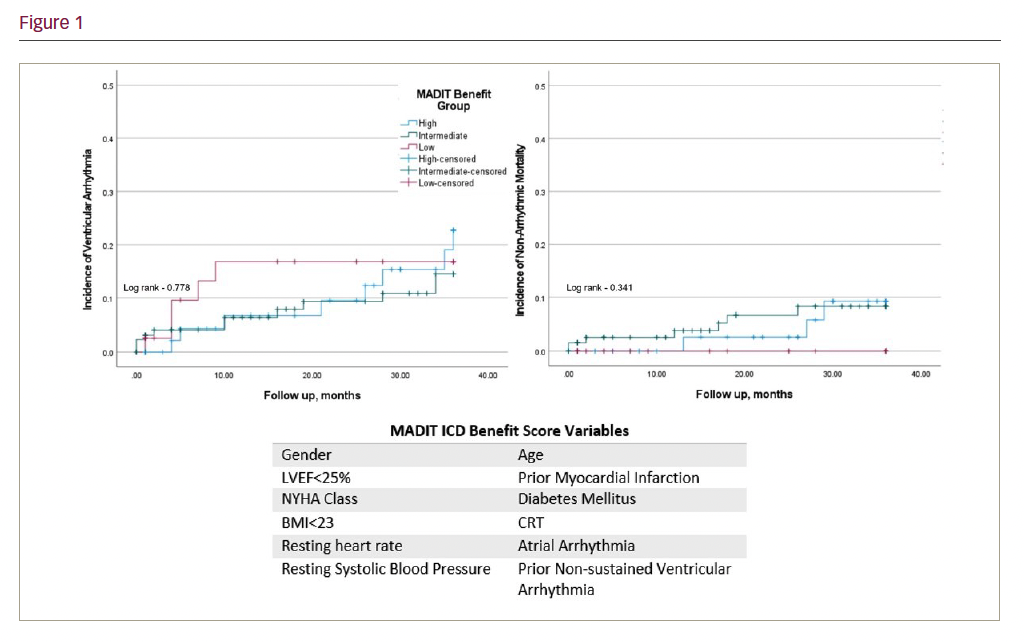 Peripheral artery disease (PAD) is a severe manifestation of systemic atherosclerotic disease that commonly refers to lower-extremity arterial involvement. The global burden of PAD is estimated to involve over 200 million patients, with prevalence increasing by 24% over the past decade.1 In contrast to myocardial infarction and stroke, which are declining in the USA, the […]

Use of Coronary Computed Tomography for Calcium Screening of Atherosclerosis

Cardiovascular disease (CVD) represents the prevailing cause of death in the United States.1 Cancer, accidents and other prevalent causes of death, have a multitude of pathophysiologic and mechanistic underpinnings leading to mortality. Meanwhile, the majority of CVD is primarily attributable to atherosclerosis.2 Moreover, the degree of coronary calcification strongly correlates with the magnitude of atherosclerotic plaque burden, […]

Long-term follow-up of patients with atrial fibrillation (AF) has confirmed a significant increase in cardiovascular events, long-term risk of stroke, heart failure and all-cause mortality (89% in those with AF compared to 27% in those without AF).1 Not only is AF associated with a five-fold increased risk of stroke, AF-related stroke is also likely to […]