Introduction: The European Society of Cardiology (ESC) has recently provided risk stratified guidance to enable early diagnosis & management of suspected cardiac syncope.1 It describes recognition of a ”low-risk” cohort of patients who may not require admission to hospital.
Aims: To analyse current practice at a busy south London DGH to ascertain what proportion of patients with low-risk features are admitted >24 hours.
Methods: Data was gathered using the medical admissions database and compared against ESC guidance. One hundred and eighteen consecutive patients coded as ”syncope” and ”black-out” admitted August 2016–February 2017 were identified.
Results: Eighty-six patients were included. Mean age was 74 years (35–92 years). Seventy-seven percent of patients were admitted for >24 hours and mean length of stay was 3.6 days.
The aetiology of syncope was diagnosed in 53% with 47% unexplained. Twenty-two percent by discharge had a diagnosis of cardiac syncope (CS). Forty-five percent of this group received a reveal device and 10% a permanent pacemaker during admission. Thirty percent CS group had any degree of AV block.
Sixty percent of the CS group had prior syncope versus 14% of the non-CS group (p=<0.001). Mean age was greater in the CS group versus the non-CS (80 years versus 73 years, p=0.058). Concurrent heart failure was significantly associated with a cardiac cause of syncope (p=0.028) whereas prior ischaemic heart disease and exertional symptoms were not predictive of a cardiac cause.
Fifty-four percent of patients with final CS diagnosis had high risk features. Twenty-three percent were classed as intermediate risk and 23% as low risk (Figure 1). Ninety-five percent had outpatient follow up arranged and 81% of follow-up appointments were within a specialised arrhythmia clinic.
Conclusions: The majority of admissions (77%) were appropriate with high/intermediate risk features present. Twenty-three percent were low-risk and could have attended early arrhythmia clinic to avoid unnecessary admission.
A significant proportion of syncope patients (47%) did not receive a diagnosis on index admission; appropriate follow up of these patients is crucial. We have highlighted the need for a dedicated outpatient syncope service.
These findings have supported the initiation of a syncope pathway at Kingston Hospital, with an emphasis on risk stratification in the emergency department at point of arrival. At this South London DGH our population is elderly and this may present challenges in facilitating early discharge according to ESC guidelines. 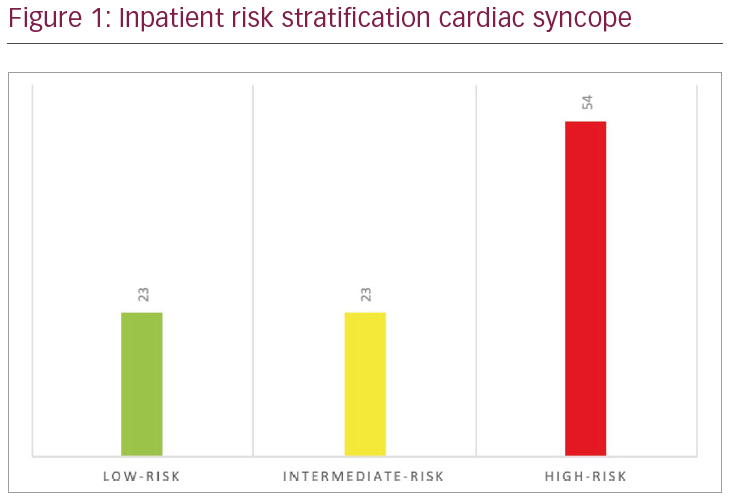