Introduction: Implantable loop recorders (ILRs) are increasingly used for detection of arrhythmias for prolonged rhythm monitoring. They have become a preferred strategy for investigation and diagnosis of arrhythmia following clinical events such as syncope and stroke. ILR implantation has been shown to have a superior diagnostic yield to conventional, external methods of cardiac monitoring and has also been shown to be more cost-effective. The current generation of ILRs are smaller compared to previous models and can be injected into subcutaneous tissue rapidly and safely by non-physicians as primary operators, with high procedural success and low complications rates. They can also utilise remote monitoring via automated or manual data transmission in order to minimise delays between detection and clinical intervention. Here, we evaluate the diagnostic utility of injectable ILRs at a major UK cardiac centre.

Results: 20 patients were excluded due to incomplete data. For the 180 remaining patients who underwent ILR implant, indications for implant were syncope (132/180 [73%]), pre-syncope (14/180 [8%]), palpitation (29/180 [16%]) and suspected AF (5/180 [3%]). During a mean (± SD) follow-up period of 327 (± 355) days the overall diagnostic yield, defined as an arrhythmia that was recorded by the ILR and led to a diagnosis which directly resulted in a change in clinical management, was 80/180 (44%). Patients in whom a diagnosis was made had a higher mean age than those in whom a diagnosis was not made (68 ± 17 vs 62 ± 18; p=0.03). Of those in whom a diagnosis was made from ILR recordings, 41/80 (51%) went on to receive either a permanent pacemaker or implantable cardioverter-defibrillator, 32/80 (40%) received a change to pharmacological management and 7/80 (9%) underwent catheter ablation for an arrythmia. Of those in whom a diagnosis was not made from ILR recordings, only 1/100 (1%) received a permanent pacemaker. Between the diagnostic and non-diagnostic group, the proportion of patients receiving a change in clinical management following ILR implant was significantly different (p<0.001). When categorising patients according to the initial indication for implant, the diagnostic yield was 39% (syncope), 48% (palpitation), 79% (pre-syncope) and 60% (suspected AF) (Figure 1). The mean time (± SD) to reach diagnosis was shortest for sinus node disease (222 ± 187 days) and longest for sustained VT (518 ± 377 days).

Conclusion: The injectable ILR is a useful diagnostic tool which directly informs clinical management, including the decision to implant therapeutic devices and institute essential medication such as anti-arrhythmic drugs and anticoagulation. The detection rate at our centre of 44% for an arrhythmia, which informed clinical management, compares favourably to other studies evaluating ILRs and re-enforces the diagnostic superiority of ILRs over conventional forms of evaluation such as Holter monitoring. Further work is warranted in order to determine the long-term prognostic value of this tool. 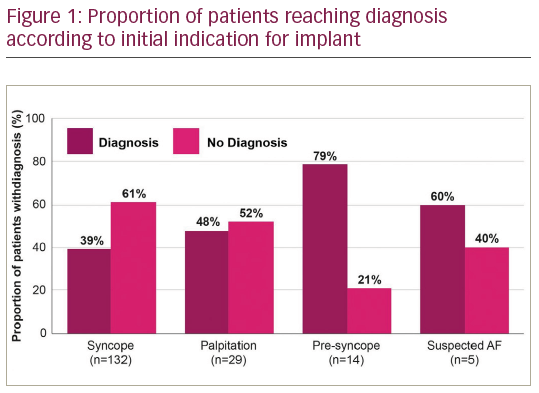