Introduction: Recurrence of persistent atrial fibrillation (PsAF) has been attributed to conduction gaps, and non-transmural linear lesion sets. Hybrid thorascopic endo-epicardial AF ablation has been shown to reduce AF recurrence when compared to endocardial ablation alone, however with higher complication rates. We propose that the percutaneous pericardial CO2 insufflation technique to access the pericardial space can be safely and effectively used for epicardial mapping and ablation of the left atrium (LA).

Methods: In a single centre, 11 patients with PsAF and previous pulmonary vein isolation (PVI) only, underwent concurrent endo-epicardial AF ablation, using the subxiphoid percutaneous pericardial access technique using CO2 insufflation of the pericardial space, whilst on uninterrupted anticoagulation. Heparinisation targeted an activated clotting time of 350 s. Endo-epicardial geometry and bipolar voltage maps were created, and endocardial ablation performed. The target LSI was 5 for the inferior line, and 6 on the roof and anterior mitral line (AML). If required, additional epicardial ablation was undertaken to establish PVI, and block the LA inferior and roof lines and an AML.

Discussion: Use of the percutaneous subxiphoid pericardial CO2 insufflation technique to achieve epicardial access for LA mapping and ablation is feasible, and safe whilst on uninterrupted anticoagulation. Limited success in ablation for PsAF beyond PVI may be due to difficulty in creating trans-mural linear lesions. Epicardial ablation can be safely performed to achieve linear block in the roof, anterior and inferior LA. Epicardial structures such as the septopulmonary bundle may contribute to difficulty blocking roof lines endocardially, and account for remote isolation of the roof line via epicardial ablation on the AML. 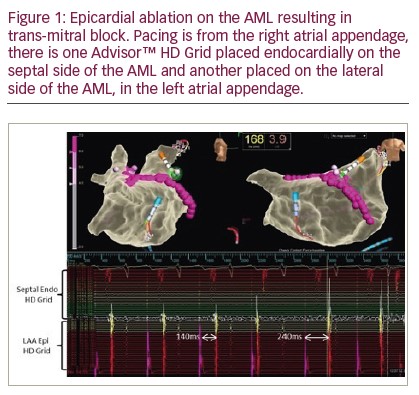 Pathogenesis of Atrial Fibrillation in Patients with Diabetes Mellitus: Impact on Ablation and Disease Recurrence

Atrial fibrillation (AF) is the most common cardiac arrhythmia observed in clinical practice worldwide.1 The incidence of AF is around 0.1% in individuals under 55 years old and 9% in those aged over 80.2 The global prevalence of AF is estimated to be around 44 million, which is approximately 0.5% of the total world population.3,4 Therefore, […]

Pathogenesis of Atrial Fibrillation in Patients with Diabetes Mellitus: Impact on Ablation and Disease Recurrence