Pacemaker implantation can be a painful and anxiety-provoking intervention. Virtual reality (VR) offers a simple and low-cost opportunity to improve the experience of patients undergoing these procedures through immersion in a distracting and meditative virtual environment. Procedure-related complications and side effects could be avoided, and VR may result in reduced analgesic and anxiolytic medication use.

Methods: A total of 20 patients undergoing elective or urgent pacemaker procedures were screened for eligibility. Two patients were excluded due to either lacking capacity or having sensory impairment limiting the use of VR headsets. This demographic was open to the novel approach; only one patient declined participation. Overall, 17 patients were enrolled in the study; nine were randomised to receive the intervention, whilst eight received standard care. The intervention group received an immersive guided meditation in VR (Healthy Mind) in addition to standard care.

Results: In those who received the VR intervention, pain, assessed using the visual analogue scale, was lower (1.9 vs 3.1), and post-procedure anxiety, assessed using the State-Trait Anxiety Inventory, was lower (80.4 vs 81.9). Local anaesthetic use was similar in both groups (28.3 vs 28.5 mL of 1% lidocaine). Fewer patients in the VR group required anxiolytic medication with midazolam (11% vs 25%) and at lower doses (mean 1.0 vs 1.75 mg). Additionally, three patients in the VR group (33%) reported falling asleep during the procedure, compared with only one in the standard care group (13%). This pilot study was not powered to detect statistically significant differences in these parameters. With continuous electrocardiogram, we monitored heart rate variability and a composite ‘stress score’ (B-Secur HeartKey); however, the prerequisite for dysrhythmias in patients undergoing pacemaker implantation precluded any meaningful interpretation. Future studies could include alternative biometrics, such as galvanic skin response, as objective markers of sympathetic stimulation. One patient removed the headset during the procedure due to discomfort related to the headset’s strap, and a pneumothorax complicated the recovery of one patient in the intervention arm. The study findings are caveated by its underpowered sample size, unblinded design, heterogeneous study population and multiple possible confounding factors.

Conclusion: This pilot study suggests a potential benefit from VR anxiolysis during implantation of cardiac devices, especially in the small but significant minority who experience significant pain. We showed that it is a feasible intervention in the demographic of patients requiring pacemakers. Given there is a low risk of harm with VR and, unlike drugs, exposure can be removed immediately in the event of side effects such as sickness, there seems little to lose. Further work into multimodal biometrics could help tailor the virtual perioperative experience. ❑ 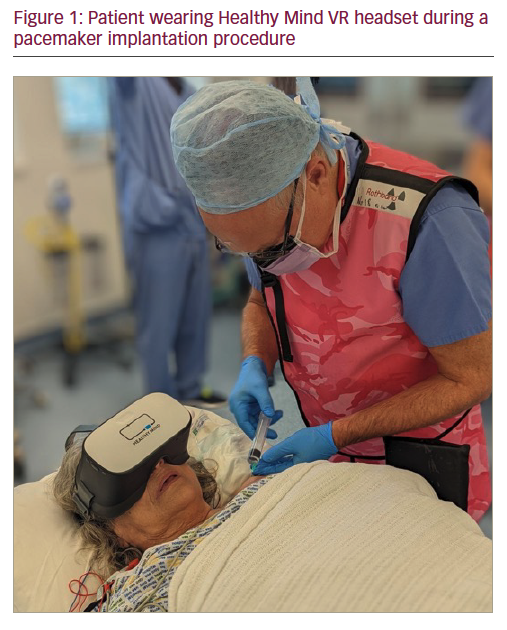