Background and introduction: Atrial fibrillation (AF) can be challenging to diagnose due to asymptomatic and paroxysmal presentation. Identifying predictors associated with prevalent AF would elucidate different underlying mechanisms causing AF and potentially refine screening procedures of at-risk patients. We developed a prognostic model for prevalent AF by repurposing deeply phenotyped individual patient data from four independent European studies, and quantified the added value of cardiac blood biomarkers to the model.

Methods: Data of 120 potential predictors were harmonised in individual patient data from four independent European studies. A
three-stage Delphi expert consensus process identified relevant predictors based on clinical knowledge. Predictors which had sufficient data across all datasets were further reduced using statistical selection (backward elimination) and a logistic regression model was fitted. Odds ratios (OR) for each of the selected predictors were calculated and model performance evaluated using the C-statistic. The added predictive value of eight centrally quantified blood biomarker concentrations were calculated (Roche Diagnostics) in a subset of patients.

Conclusions: Our preliminary analysis identified important prognostic factors and a complex relationship between age and sex, in predicting prevalent AF, highlighting the different potential causes of AF in different patients. There is a clear need to validate these factors in external datasets and for further investigation into the molecular mechanism underlying these factors. 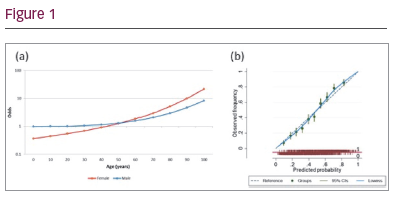