Aortic stenosis and coronary artery disease (CAD) frequently co-exist as they share a common pathophysiology and risk factors. Due to lack of randomised controlled trials (RCTs) and exclusion of significant CAD in transcatheter aortic valve replacement (TAVR) trials, the optimal method of revascularisation of CAD in patients undergoing TAVR, remains unknown. Observational studies and meta-analyses have shown varied results in outcomes for patients with CAD undergoing TAVR and no significant difference in post-TAVR outcomes in patients who underwent revascularisation either prior to or during TAVR, versus those who did not. However, some observational studies have shown that patients with lower residual SYNTAX score (rSS) post-revascularisation have better outcomes post-TAVR compared to those with higher rSS. RCTs are needed to clearly understand whether revascularisation is beneficial in these patients. Until then, management of CAD in patients undergoing TAVR must be individualised based on discussion with the heart team.

The prevalence of CAD in patients with TAVR varies from 30–80%.18–25 Based on varying definitions of significant CAD, about 50–70% of patients with aortic stenosis have concomitant significant CAD,6,8,26,27 with 50% having multivessel CAD.10,26,28–30 In the FRANCE 2 (French Aortic National CoreValve and Edwards 2) registry of 3,195 patients that underwent TAVR, 48% had CAD, 16% had history of myocardial infarction, and 18% had prior surgical coronary revascularisation.31

The RCTs of TAVR excluded patients with severe CAD.18,20–5 There are no RCTs evaluating outcomes of coronary revascularisation before or during TAVR in patients with concomitant CAD, and several observational studies and meta-analyses have reported conflicting results.6,8–15,30,36,37 Multiple single-centre registries showed no difference in mortality in follow-up up to 5 years in patients that underwent PCI prior to TAVR versus TAVR alone (Table 1).6,8–11,15,36,37

In patients with severe aortic stenosis and concomitant CAD, the identification of ischaemia secondary to CAD can be challenging as aortic stenosis causes myocardial ischaemia on stress testing in the absence of angiographically significant CAD, which generally tends to disappear after valve replacement.39 Hence, non-invasive stress testing has lower sensitivity and specificity for detecting CAD in severe aortic stenosis patients.39,40 There are no data to support the use of non-invasive assessment to guide revascularisation in patients undergoing TAVR. However, non-invasive stress testing can be helpful if the area of ischaemic myocardium matches the territory subtended by the stenosed coronary artery.

Although fractional flow reserve (FFR) and instantaneous wave-free ratio (iFR) are standard methods of invasive physiologic assessment of CAD, there is significant ambiguity interpreting these results in patients with severe aortic stenosis.41 This is due to the unequal changes on proximal pressure waveforms caused by stenosed aortic valve, the haemodynamic effect of the uncoupling of aortic valve closure from a decrease in left ventricular pressure, and the effect of left ventricular hypertrophy on microvascular function.42 However, a recent study by Ahmad et al. showed iFR values did not change pre- and post-TAVR (p=0.73), whereas FFR decreased significantly post-TAVR compared with pre-TAVR (p=0.001) indicating iFR may be reliable in identifying significant CAD.43

Though there are no RCTs in this sphere, there are several observational studies and meta-analyses that evaluated the effect of completeness of revascularisation on post-TAVR outcomes. The residual SYNTAX score (rSS) is an objective measure of the degree and complexity of residual CAD after PCI, and is a powerful indicator of 5-year mortality.44 Recent single-centre registry data12–4,30 showed that patients who underwent PCI prior to TAVR and had low rSS, ranging from 0–14, had a lower incidence of MACCE over 5 years of follow-up when compared with high rSS.12–4,30 A meta-analysis by D’Ascenzo et al., which included 13 studies and 8,334 patients, showed mere presence of CAD had no effect on 30-day or 1-year mortality in patients who underwent TAVR, but those patients with CAD and SYNTAX score >22 had higher 1-year mortality (OR 1.71; 95% CI 1.24–2.36) and those with a rSS <8 post-PCI had lower 1-year mortality (OR 0.34; 95% CI 0.012–0.93).28 Witberg et al. showed that patients with a SYNTAX score >22 had higher MACCE up to 2 years after TAVR, and patients with rSS <8 had similar MACCE compared with patients without CAD.45 In another study, Witberg et al. compared the effect of severity of CAD and complete versus incomplete revascularisation (rSS >8) on TAVR outcomes, and showed higher all-cause mortality at 1.9 years in patients with SYNTAX score >22 (hazard ratio [HR] 2.091; p=0.017) and incomplete revascularisation (rSS >8) (HR 1.720; p=0.031).30

Thus, SYNTAX score could be used as a tool to help guide revascularisation prior to TAVR, and one may aim to achieve an rSS <8 with revascularisation for best outcomes post-TAVR. However, the findings of observational studies related to the effect of SYNTAX score and rSS on TAVR outcomes need to be confirmed in RCTs for their use to be incorporated into guidelines and routine practice. Figure 1 depicts our proposed algorithm for revascularisation in patients undergoing TAVR. 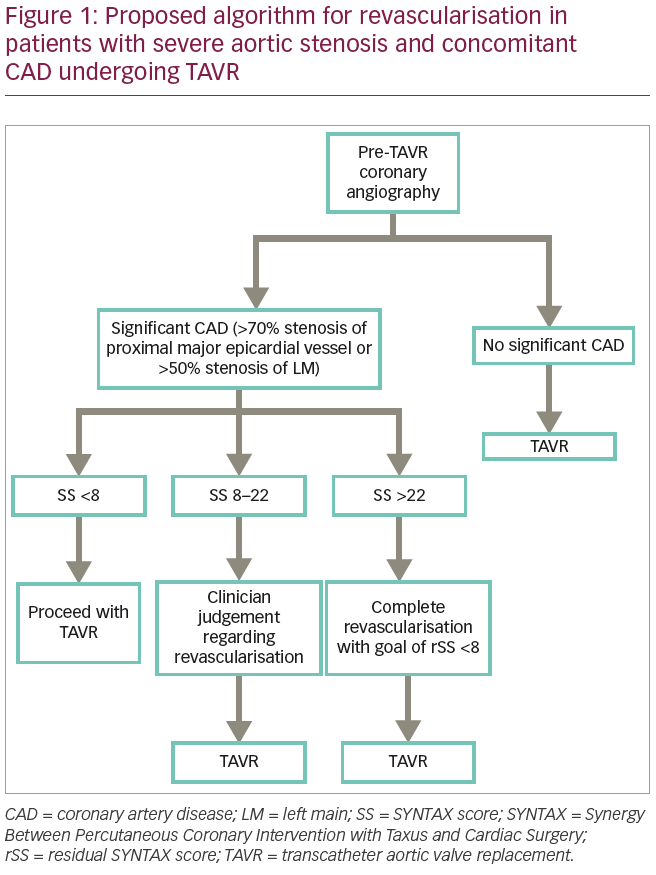 Although there are potential benefits of combining TAVR and revascularisation as a single procedure, such as fewer vascular access procedures and reduction in ischaemic burden during TAVR, there is a potential increased risk of contrast-induced nephropathy as well as increased operator and patient radiation exposure. Thus, there is a need for RCTs to better understand the optimal timing for revascularisation in relation to TAVR. A more widely practiced strategy is performing revascularisation prior to TAVR. The potential benefits of this approach include easier coronary access in the absence of a valvular prosthesis, lower ischaemic burden and related haemodynamic instability during TAVR, and lower contrast volume and radiation exposure time during each individual procedure. The potential risks include a higher risk of bleeding as these patients are on uninterrupted dual antiplatelet therapy during TAVR and increased risk of haemodynamic instability during revascularisation in the presence of severe aortic stenosis. Abdel-Wahab et al. compared the outcomes of revascularisation followed by TAVR (55 patients) versus isolated TAVR (70 patients).7 The median duration from revascularisation to TAVR was 10 days (0–90), and this small study showed a trend toward lower 30-day mortality with revascularisation prior to TAVR versus TAVR alone (2% versus 6% respectively, p=0.27) that did not reach statistical significance.7

Revascularisation in patients with left ventricular dysfunction and severe aortic stenosis is challenging as there is risk of haemodynamic instability during the procedure. Goel et al. studied 254 patients with severe aortic stenosis who underwent PCI.29 The results concluded that patients with severe aortic stenosis and low ejection fraction ≤30% had a higher 30-day post-PCI mortality compared with those with an ejection fraction >30% (5.4% versus 1.2%, respectively; p<0.001). The study also concluded that a high Society of Thoracic Surgeons (STS) score ≥10 was associated with higher 30-day post-PCI mortality compared with an STS score <10 (10.4% versus 0%, respectively; p<0.001). Mechanical circulatory support with Impella (Abiomed, Danvers, MA, USA) in selected high-risk patients, such as cardiogenic shock or severely depressed ejection fraction, is a feasible option to maintain haemodynamic stability in patients with severe aortic stenosis undergoing PCI.49,50 A recent publication from the cVAD registry, including 116 patients (mean STS score 18.7 ± 18.3%, mean left ventricular ejection fraction 27 ± 16%, and mean aortic valve area 0.67 ± 0.29 cm2) who received high-risk PCI and Impella-assisted BAV, demonstrated that elective Impella support was associated with higher 1-year survival compared to rescue placement.50 However, RCT data are currently lacking and needed for identifying the best management option in these high-risk patients.

With conflicting results from observational studies and meta-analyses, the dilemma of whether to perform revascularisation plus TAVR or TAVR alone, remains. Three ongoing RCTs will help answer this question: the ACTIVATION trial (ISRCTN75836930) is a prospective RCT that compares PCI in coronary arteries with more than 70% stenosis followed by TAVR versus TAVR alone,51 NOTION-3 (ClinicalTrials.gov Identifier: NCT03058627) is a prospective RCT comparing TAVR alone versus FFR-guided PCI plus TAVR, and the FAITAVI trial (ClinicalTrials.gov Identifier: NCT03360591) is a prospective RCT comparing angiographic- versus FFR-guided PCI in patient undergoing TAVR.

Coronary access and PCI may be challenging in patients post-TAVR. It is important to understand the structure of each transcatheter aortic valve prosthesis for optimal success. Pre-procedure computed tomography analysis is critical for TAVR procedure planning, in order to avoid coronary obstruction.52,53 A large observational study by Zivelonghi et al. showed coronary re-access and PCI are possible after TAVR.54 The authors performed coronary angiograms after TAVR in 66 patients: 25 with CoreValve™ Evolut™ R valves (Medtronic, Dublin, Ireland) and 41 with SAPIEN 3 valves (Edwards Lifesciences, Irvine, CA, USA). They successfully performed diagnostic angiography with diagnostic catheters in 96% of vessels; 4% vessels required guide catheters while one artery could not be engaged due to the unfavourable positioning of an Evolut R valve.54 They were able to successfully perform PCI in all 17 intended patients: 6 with Evolut R and 11 with SAPIEN 3 valves.54

Coronary re-engagement may be especially challenging with self-expanding Evlout R valves, as the valve extends above the coronary ostia, unlike the balloon expandable SAPIEN 3.53 However, these challenges may be overcome with increased operator experience and down-sizing of the catheter. According to a study by Boukantar et al., among patients with Evolut R valves, post-TAVR PCI was associated with significantly higher contrast usage, fluoroscopy times and radiation dosage when compared with coronary angiography performed prior to TAVR.55 Aortic stenosis indications for TAVR have recently expanded to include a lower risk population, younger patients may undergo TAVR, necessitating more frequent post-TAVR coronary procedures. Moreover, a wide variety of TAVR valves have emerged into clinical practice, including the self-expanding JenaValve™ (JenaValve technology GMbH, Munich, Germany), the Portico™ Valve (St. Jude Medical, St. Jude Medical, MN, USA), the ACURATE neo™ Valve (Boston Scientific, Marlborough, MA, USA), the Lotus Valve (Boston Scientific), and the Allegra Valve (NVT AG, Muri, Switzerland), that necessitate interventional cardiologists to become proficient in post-TAVR angiography and PCI with each different valve.

In summary, in patients with CAD undergoing TAVR, the SYNTAX score can be a useful tool in deciding which patients may benefit from PCI prior to TAVR. In patients with high SYNTAX score (>22), we recommend performing PCI before TAVR to improve post-TAVR outcomes. In those with low SYNTAX score (<8), no additional coronary intervention is necessary and operators can proceed directly with TAVR. However, in those with intermediate SYNTAX score (8–22), the decision to perform PCI should be individualised based on the clinical risk factors in consultation with the Heart Team. Further large-scale RCTs are required to provide definitive answers regarding management of these complex group of patients.

This article is freely accessible at touchCARDIOLOGY.com. © Touch Medical Media 2020.

Hypertrophic cardiomyopathy (HCM), along with its more common subgroup, hypertrophic obstructive cardiomyopathy (HOCM), is the most common monogenic cardiovascular disorder, with a prevalence of about 1 in 500,1 and a dominant inheritance pattern, thus clustering in affected families. Patients with HCM often have significant limitations to their exercise capacity, and while there are several underlying pathomechanisms for […]

Vasospastic Angina: A Contemporary Review of its Pathophysiology, Diagnosis and Management

Nearly half of patients who present with angina have non-obstructed coronary arteries (ANOCA).1 A significant proportion of these patients have a coronary vasomotor dysfunction, such as coronary microvascular disease and/or coronary artery spasm.2,3 Vasospastic angina (VSA) refers to a dysfunctional state where there is sudden coronary flow attenuation as a result of either epicardial or microvascular spasm, […]

Welcome to the summer 2021 edition of Heart International. This issue contains 9 informative review articles on a range of topics which we hope will be of interest to all cardiovascular practitioners, regardless of subspecialism. We begin with a review by Chu and Gupta, who explore the use of etripamil nasal spray, a novel preparation […]