The complete and safe removal of a mediastinal mass requires cardiopulmonary bypass if the mass encroaches or compresses the heart and its great vessels. A 15-year-old male presented with a huge mediastinal mass with gradually worsening symptoms. Surgical removal of the tumour was planned under general anaesthesia and cardiopulmonary bypass based upon contrast-enhanced computed tomography of the chest, which suggested infiltration of the cardiac structures. Intraoperative transoesophageal echocardiography revealed a distinct separation of the tumour mass from the heart and its great vessels. The mass was excised en bloc without cardiopulmonary bypass.

Perioperative management of a mediastinal tumour is an anaesthetic challenge. Echocardiography is not considered as a primary diagnostic modality in the evaluation of a mediastinal mass; however, it can provide valuable information in patients with clinical and diagnostic evidence of cardiac compression or encroachment. Judicious interpretation of perioperative transthoracic or transoesophageal echocardiographic images may be of great help to both the surgeon and anaesthesiologist in planning a proper management strategy. An effective preoperative plan and the preparation of femoral vessel cannulation for cardiopulmonary bypass initiation are imperative to avoid catastrophic respiratory and cardiac complications during anaesthetic induction. Furthermore, surgical manipulation may injure major vessels and the heart, and may induce non-sustainable haemodynamic alterations in case of the encasement of major vessels and the pericardium by the tumour.

A 15-year-old, 45 kg male was referred to our institution with a 2-month history of left-sided chest pain, difficulty in lifting the left arm, progressive dyspnoea, orthopnoea, recurrent cough and fever. Contrast-enhanced computed tomography (CECT) of the chest showed a heterogeneously enhancing anterior mediastinal mass with areas of chunky calcification and measuring 9.5 cm in its longest dimension. There was infiltration of the anterior chest wall, left atrium, left ventricle and descending thoracic aorta. Tracheobronchial anatomy was normal and there was no evidence of pleural or pericardial effusion. Furthermore, CECT did not suggest any evidence of pulmonary artery infiltration. Other diagnostic evaluations included a chest X-ray, which showed a cardiothoracic ratio of 0.7, and normal serum biochemical profiles. Needle-guided biopsy confirmed a malignant germ cell tumour. The patient was receiving chemotherapeutic drugs consisting of doxorubicin, etoposide and cisplatin, which had been initiated in the oncology department before referral to the cardiothoracic department. However, his symptoms gradually worsened. Surgical resection of the tumour was planned under cardiopulmonary bypass.

Induction of anaesthesia and endobronchial intubation with a double-lumen endotracheal tube were uneventful. Intraoperative transoesophageal echocardiography (TOE) examination revealed normal main pulmonary artery calibre without any sign of encroachment or compression (Figure 1). An outline of the left ventricle, left atrium and ascending aorta was clearly visible and there was no evidence of compression of the left ventricular outflow tract or the ascending aorta (Figure 2). There was no evidence of excessive blood flow acceleration in the pulmonary artery or the ascending aorta. The pressure gradient across the aortic and the pulmonary valve was minimal. Three-dimensional TOE revealed a distinct separation between the tumour mass and the heart (Figure 3). 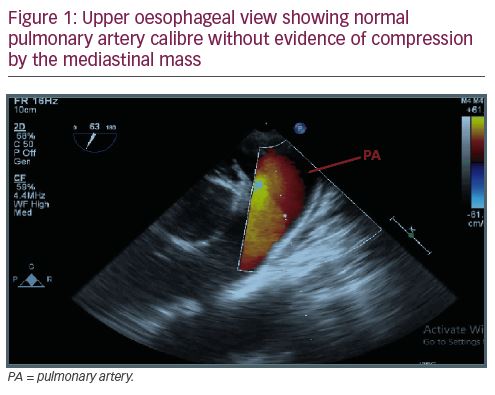 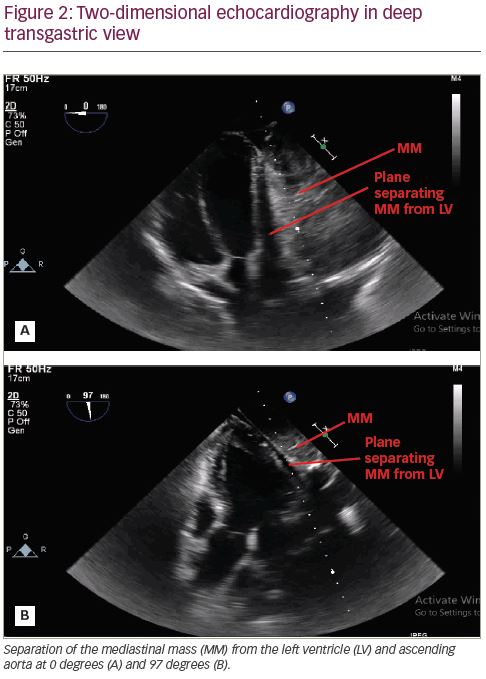 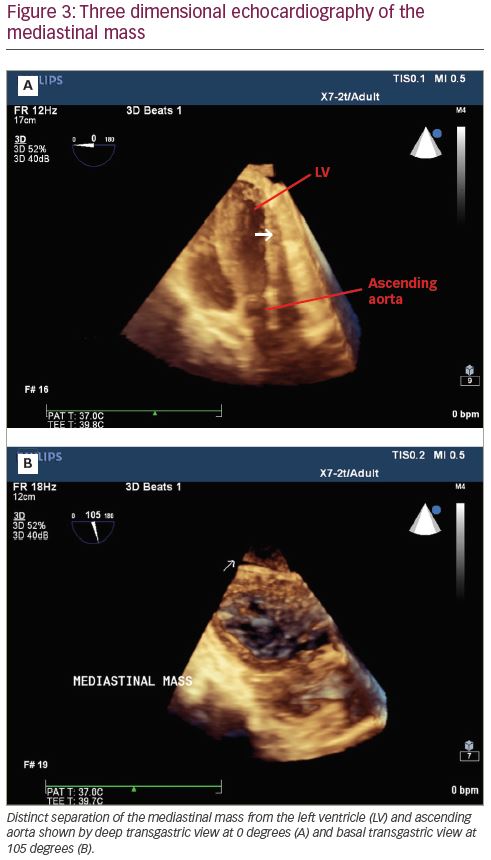 The surgical plan was changed after interpretation of the TOE images and manual palpation of the tumour. Left-lung isolation was achieved to facilitate surgical resection and to avoid damage to the lung parenchyma. The tumour was resected en bloc with a clean margin, and without cardiopulmonary bypass, through hemiclamshell thoracotomy (Figure 4). Noradrenaline infusion at 0.05 μg/kg/min, and intermittent boluses of phenylephrine, were used to treat hypotension during handling of the tumour and the heart. The post-operative period was uneventful and the patient was extubated after 4 hours. The following postoperative day, the patient was moved to the oncology department for chemotherapy and follow-up. The patient’s consent was obtained for the publication of this article during follow-up. 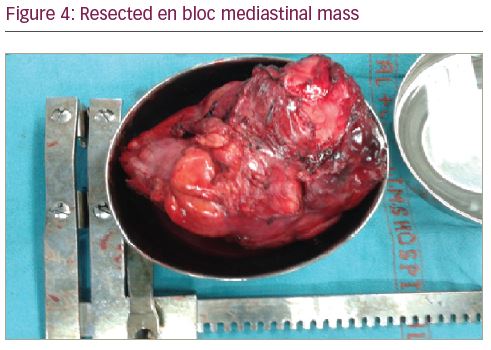 Five to 10% of all germ cell cancers arise in extragonadal locations, such as a typical midline structure, particularly in the mediastinum. There is no potential space within the chest cavity, and any space-occupying lesion tends to displace other vital structures. A mass within the mediastinum can encroach and/or compress the heart and its great vessels. Encroachment does not usually produce haemodynamic changes, but compression by the mass produces haemodynamic changes similar to pericardial tamponade.1 Computed tomography and magnetic resonance imaging are essential for complete staging, and assessment of extent and surgical resectability of the mass.

TOE can provide supplemental information regarding encroachment and compression. TOE is more accurate than transthoracic echocardiography in detecting mediastinal masses (90% versus 73%), in identifying their structure (100% versus 90%), and in evaluating their relationship with contiguous organs (89% versus 81%).2 TOE has its limitations; it cannot delineate every surface and border of the heart. However, real-time images may provide evidence of mediastinal pleural sliding, which may help to exclude tumour invasion to the surrounding structures. Furthermore, real-time TOE imaging during surgical manipulation helps to alert the surgeon during manipulation and guides the anaesthesiologist in optimising the haemodynamics. We tried to visualise the mass in all possible TOE views. It was only possible to visualise separation of the mediastinal mass from the cardiac structures in the deep transgastric view.

The difference in the CECT report and TOE interpretation could be due to chemotherapy-induced shrinkage in the tumour size; however, CECT was only performed 6 days prior to surgery and the patient’s symptoms further worsened during those intervening days. We are of opinion that the radiographer may have over-read the CECT chest images. The decision to not to use the cardiopulmonary bypass from the beginning was not solely based upon TOE images. TOE gave additional information about the separation of the mediastinal mass from the heart, and the surgeon further confirmed this separation by manual palpation.

Despite haemodynamic fluctuations, the patient tolerated surgical manipulation of the heart without major haemodynamic compromise. Had there been major haemodynamic deterioration, we would have used cardiopulmonary bypass. Complete isolation and en bloc resection of tumours are difficult without cardiopulmonary bypass. It is equally challenging for the anaesthesiologist to maintain normal haemodynamic parameters during manipulation of the heart. Discernible tissue planes should be present for complete isolation and en bloc resection of a tumour. Surgical resection of malignant germ cell tumours after chemotherapy has shown favourable long-term survival. Complete resection should be performed to achieve long-term survival.3

TOE can provide valuable supplemental information about the extent of encroachment or compression by a mediastinal tumour. TOE can continuously estimate the ventricular end diastolic volumes and pressures, and thus helps with intraoperative haemodynamic management during tumour mobilisation and resection.

Ajay Kumar Jha has no financial or non-financial relationships or activities to declare in relation to this article.

Informed consent was received from the patient involved in this case study.

Hypertrophic cardiomyopathy (HCM), along with its more common subgroup, hypertrophic obstructive cardiomyopathy (HOCM), is the most common monogenic cardiovascular disorder, with a prevalence of about 1 in 500,1 and a dominant inheritance pattern, thus clustering in affected families. Patients with HCM often have significant limitations to their exercise capacity, and while there are several underlying pathomechanisms for […]

Vasospastic Angina: A Contemporary Review of its Pathophysiology, Diagnosis and Management

Nearly half of patients who present with angina have non-obstructed coronary arteries (ANOCA).1 A significant proportion of these patients have a coronary vasomotor dysfunction, such as coronary microvascular disease and/or coronary artery spasm.2,3 Vasospastic angina (VSA) refers to a dysfunctional state where there is sudden coronary flow attenuation as a result of either epicardial or microvascular spasm, […]

Welcome to the summer 2021 edition of Heart International. This issue contains 9 informative review articles on a range of topics which we hope will be of interest to all cardiovascular practitioners, regardless of subspecialism. We begin with a review by Chu and Gupta, who explore the use of etripamil nasal spray, a novel preparation […]