Introduction: Implantable cardiac-defibrillators (ICD) can prevent sudden cardiac death but the risk of recurrent ventricular arrhythmia (VA) and ICD therapies persists. Strategies to minimize such risks include medication optimization, device reprogramming or ventricular tachycardia (VT) catheter ablation (CA). However, the timing and choice of these strategies at ICD follow-up may not be as consistent in the real-world as the regulated conditions of clinical trials. Whether these decisions are influenced by the type of arrhythmia, ICD therapy or patient characteristics remain unclear.

Aim: We evaluated ICD follow-up strategies in patients with ischaemic (ICM) and non-ischaemic cardiomyopathy (NICM) to refine the outpatient management of these complex patients and ultimately improve patient outcomes.

Methods: REFINE-VT is a retrospective study of 514 consecutive patients with ICD/CRT-D who attended ICD follow-up between June 2018 to September 2019 at the University Hospitals Coventry & Warwickshire (UHCW) tertiary cardiology department. All follow-ups were face-to-face. Patients were divided into 2 groups according to the absence or presence of sustained VA (e.g. >30 seconds of VT and/or appropriate ICD therapy), described as ‘negative event’ and ‘positive event’ groups, respectively. The types of strategies employed in response to a positive event were categorized into 4 groups: (1) Medication change only (2) Device programming +/- medication (3) Referral for VT CA (4) No intervention.

Results: 514 consecutive patients with ICD (52%) or CRT-D (48%) were analysed. Overall mean age was 67 ± 14 years with 79% male patients. ICM was diagnosed in 329 (64%) patients and NICM in 185 (36%). 437 (85%) patients had no significant VA and/or ICD therapy referred to as the negative group. A total of 77 patients (15%) suffered VA and/or ICD therapies, of whom 22 patients (26%) experienced a second event. 31% (n=24) of this positive event group received no preventative strategy. We observed an inconsistent approach to the choice of strategies across different types of arrhythmias and ICD therapies. E.g. the odds of intervening were significantly higher if ICD shock was detected compared to anti-tachycardia pacing (ATP) (OR 8.4; 95% CI, 1.7 39.6; p=0.007). Even in patients with two events, the rate of referral for VT ablation and escalation of antiarrhythmics were similarly as low as patients with a single event (Table 1). 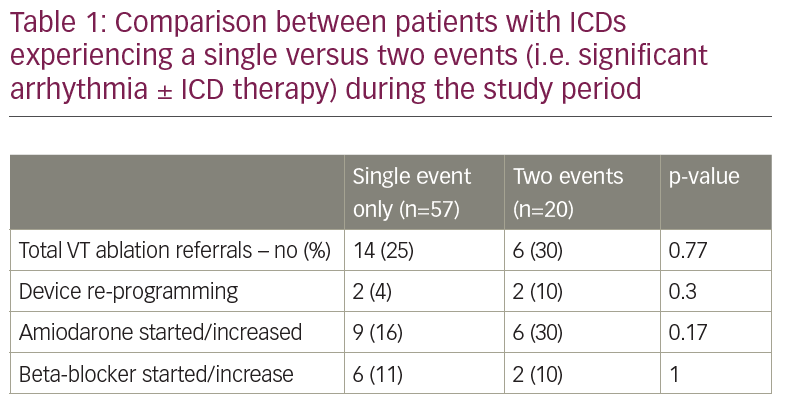 Conclusion: This is the first contemporary study that has evaluated how strategies that reduce the risk of recurrent ICD events are executed in a real-world population. We have demonstrated that the decision to intervene and choices of strategy remain inconsistent and partially biased by the type of arrhythmia and ICD therapy at follow up. The impetus to intervene appears to favour patients with detected ICD shocks than those with ATP even though both are known to be associated with adverse clinical outcomes. This supports the need for an evidence-driven multi-disciplinary VT clinic to refine and standardize our approach to this heterogeneous population.