Introduction: Premature ventricular complexes (PVC) are often encountered in general population and the frequent occurrence of PVC may induces left ventricular dysfunction in patient with or without structural heart disease. The left ventricle summit (LVS) is the triangular area, most superior portion of the LV epicardium bounded by bifurcation of left anterior descending coronary artery (LAD) and left circumflex coronary artery (LCX). These portion transected by great cardiac vein (GCV). Ventricular arrhythmias originating from this region may present challenges for catheter ablation.

Methods: We presented a case of 31-year-old gentleman whom presented with recurrent palpitations during strenuous activities. He has no co-morbid or family history of sudden cardiac death. His baseline electrocardiogram (ECG) showed sinus rhythm with PVC, RBBB pattern with positive lead II, III, aVF and negative lead I, aVL which suggesting left sided origin (Figure 1). Holter shows 12% PVC burden and echocardiography was unremarkable with ejection fraction 66%. EST was performed with frequent PVC appeared during stage 2.

Step 2: Mapping the RVOT. The earliest activation signals were mapped.

Step 3: Mapping the GCV. There was challenges to manoeuvre the catheter in order to advance to the distal most of GCV.

Result: LAT mapping at the RVOT and LVOT were early by 14 ms and
21 ms respectively compared to PVC QRS. However, LAT mapping the GCV via coronary sinus showed earliest to onset QRS by 41 ms with good unipolar Qs signal (Figure 2) and pace mapping matched by 93% concordance (Figure 3).

Radiofrequency ablation was delivered at the LV summit of GCV in pulses of 30 s, 15–25 watt at 45 °C for a total of 180 s. The PVC disappeared after ablation and remained silent despite after 30 minutes post ablation.

We followed up the patient after 3 months of ablation and he was free from symptoms and PVC in the surface ECG.

Conclusions/Implications: Catheter ablation of LV summit PVC can be challenging due to its anatomical location. LV summit can be approached by endocardium and epicardium. However, the latter may complicate a catastrophic peri-procedural risk such coronary artery injury and coronary vein perforation. In our case, we successfully ablated the PVC from GCV without causing any complications. 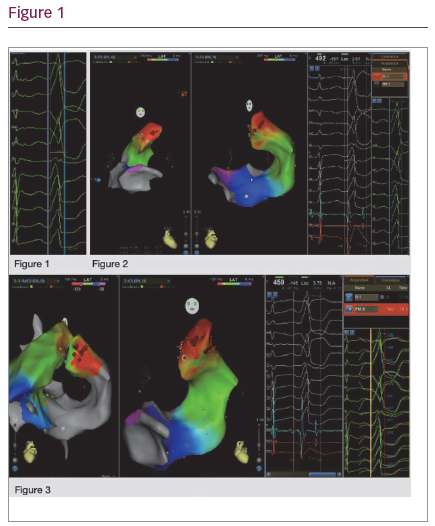