We present a clinical case of a patient with dilated cardiomyopathy who neither sufficiently responded to optimal medical therapy nor to cardiac resynchronisation therapy. A cardiac contractility modulation system was implanted and after ~2 years of combined therapy with medication and devices systolic left ventricular ejection fraction returned to near normal values.

We report on a 53-year-old man with a history of heart failure due to alcoholic dilated cardiomyopathy with severely depressed systolic left ventricular (LV) function. Initial LV ejection fraction was ~20% (Simpson’s biplane method, Loops 1 and 2). At the time of diagnosis his clinical status was New York Heart Association (NYHA) III-IV and he had left bundle branch block. Cardiac resynchronisation therapy (CRT) was initiated after ramipril, bisoprolol and spironolactone had been established for >6 months, intermittent use of loop diuretics was necessary.

The patient did not respond sufficiently to optimal treatment including CRT despite adequate LV lead position (echocardiogram, Figure 1, Loops 3 and 4). Cardiac contractility modulation (CCM) therapy was initialised by implantation of an Optimizer IV system™ (Impulse Dynamics, Loops 7 and 8, Figure 2). Over a period of 16 months, NYHA class as well as systolic LV function normalised (Figure 1, Loops 5 and 6). Settings for CCM were 30 ms after ventricular sensing, biphasic current of 7.5 V amplitude and 21 ms duration. Of note, the patient continued alcohol abuse.

Long-term follow-up (>1 year) from prospective randomised trials is lacking for patients treated with CCM. Our case demonstrates improvement in LV function with CCM after 16 months in a patient with insufficient response to CRT. CCM treatment of CRT nonresponders has been described in a series of patients.3 However, previous trials excluded patients with wide QRS or CRT, there is no randomised trial in patients with CRT. This case suggests positive long-term effects of CCM therapy on top of standard therapy for heart failure patients with reduced LV ejection fraction not responsive to CRT. 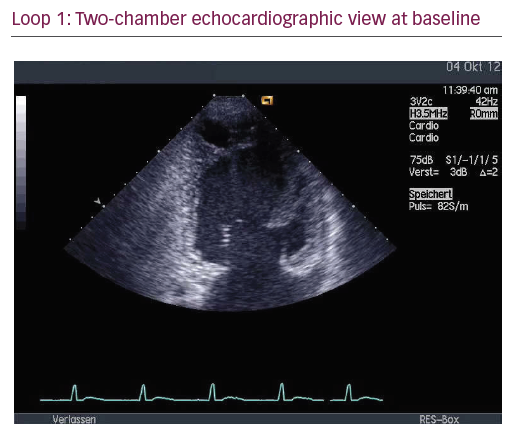 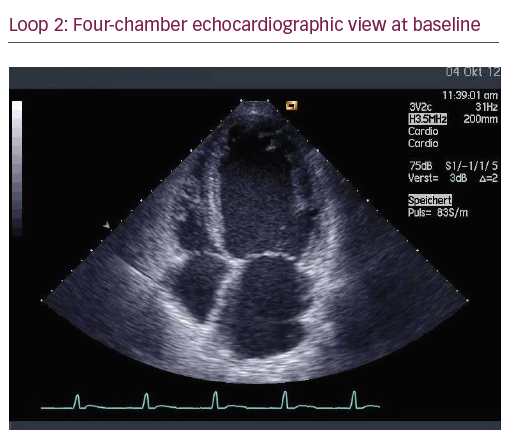 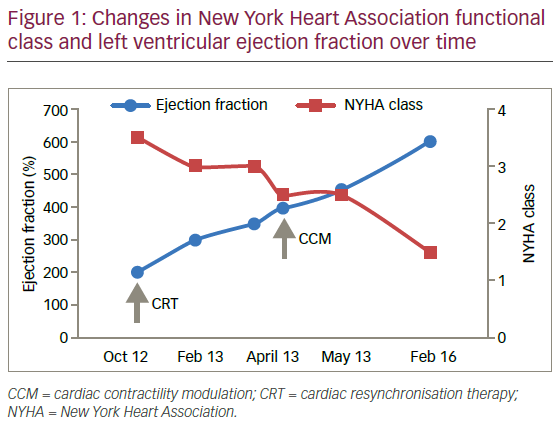 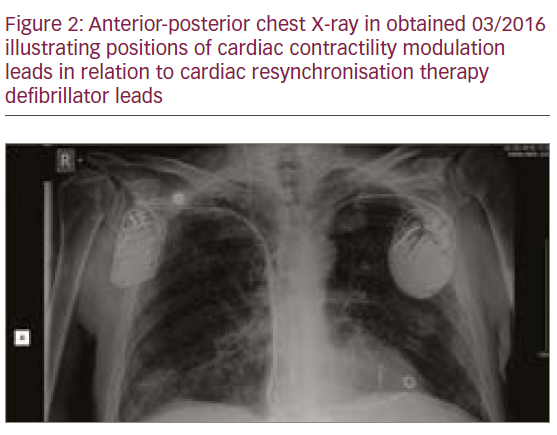 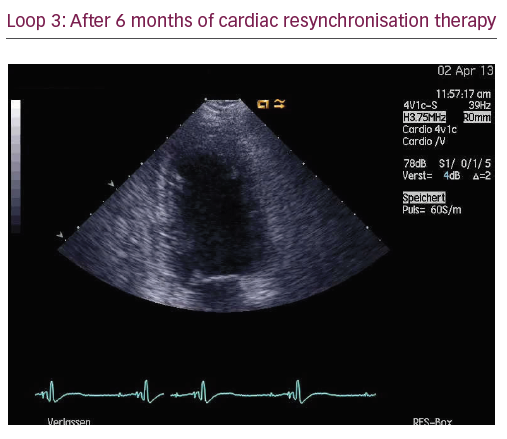 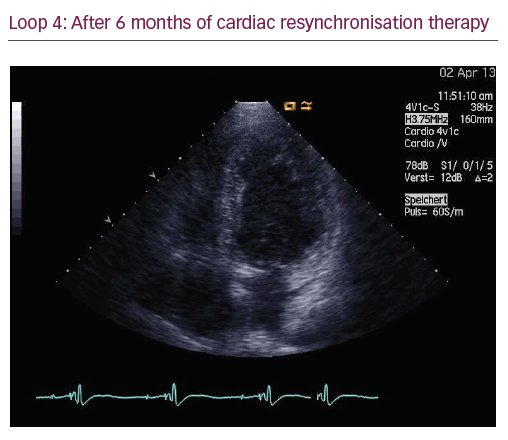 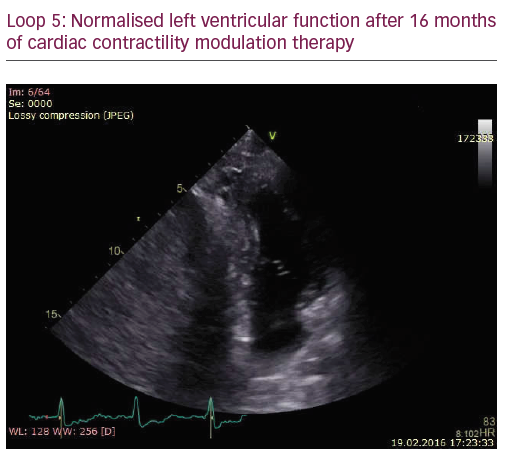 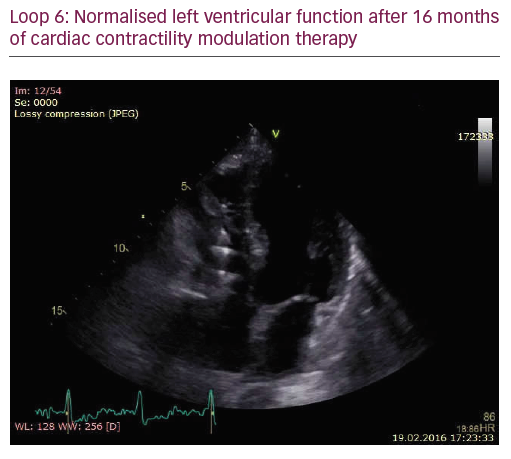 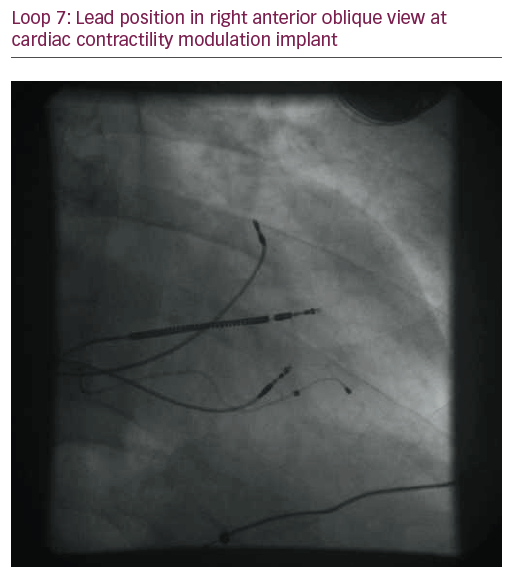 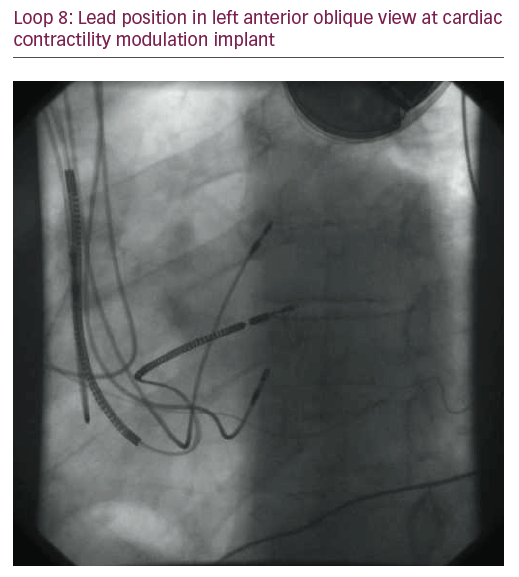 Joachim R Ehrlich has received
speaker and advisor honoraria from Impulse
Dynamics. Laurens Bon, Bernhard M Kaess, Andre
Hochgesand, Albrecht Römer and Gerd Bürkle
have nothing to declare in relation to this article.
Review Process: Double-blind peer review.
Compliance with Ethics: All procedures were
followed in accordance with the responsible
committee on human experimentation and with
the Helsinki Declaration of 1975 and subsequent
revisions, and informed consent was received
from the patient involved in this case study.
Authorship: All named authors meet the International
Committee of Medical Journal Editors (ICMJE) criteria
for authorship of this manuscript, take responsibility
for the integrity of the work as a whole, and have
given final approval to the version to be published.

This article is published under the
Creative Commons Attribution Noncommercial License,
which permits any non-commercial use, distribution,
adaptation and reproduction provided the original
author(s) and source are given appropriate credit.
© The Authors 2018. 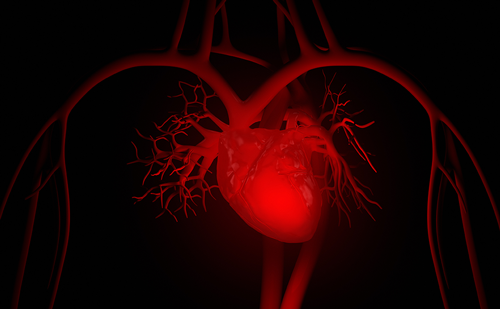