The conventional pacing systems consist of a small size-battery, an electronic circuit and leads. Despite improvements in diagnostic and therapeutic features, transvenous leads remain the weakest link of the pacing system. Nowadays, two types of leadless cardiac pacemaker (LCP) exist leading stimulation from the right ventricle (RV) apex or low septum at the desired lower rate, with rate responsive algorithms. We report our experience with an LCP implant in a severely obese patient and demonstrate the feasibility of the procedure and the excellent telemetric (conductive) communication between the LCP and the programmer despite the critical mass of the patient.

Case report
A 50-year-old man with a history of myocardial infarction (MI) in 2006 and arterial hypertension presented with episodes of paroxysmal atrio-ventricular block (AVB). He was also affected by severe obesity (353 kg) with a body mass index (BMI) of 121 kg/m2 and diabetes mellitus (Figure 1). He was transported from another hospital to our reference center in a special ambulance by the fire service. Since 2006 the patient had refused to take any medications. The poor-quality trans-thoracic echocardiogram (TT) showed a preserved left ejection fraction (LVEF), and normal sized right (RV) and left ventricles (LV) with an inferior wall akinesia. Despite the critical mass of the patient, taking into account the clinical situation and relatively young age, it was decided to consider the option of a percutaneous leadless pacemaker implant (Nanostim™ Leadless Pacemaker System [LCP], St. Jude Medical, Sylmar, CA, US). We required an extra-support for the operating bed, and for this reason it couldn’t be moved at all during the procedure. After local anesthestic was administered, puncture of the right femoral vein was performed under ultrasound guidance with pericardiocentesis needle (Easy Kit for pericardiocentesis, ab medica spa, Milan, Italy). After positioning a long guidewire (Amplatz Super Stiff™ J-Tip Guidewire, Boston Scientific, MA, US), the RV was reached with a Pig-Tail (Pig 5.2F Super Torque® Plus, Angiographic Catheter, Cordis®, Miami Lakes, Florida, US) and an angiography at the apex was performed (Figure 1). The delivery system (Nanostim™ Delivery System Catheter) with the LCP mounted on a deflectable tip was advanced under fluoroscopic guidance through the inferior vena cava to the right atrium and then RV. The pacemaker was successfully implanted in the RV low septum, screwing it with 1.25 turns. The tug test for stability was performed (Figure 3A and B). Before the complete release of the LCP, the telemetric communication between the LCP and the programmer (Merlin™ Patient Care System, St. Jude Medical, Sylmar, CA, US, equipped with S1LINK module) was tested. Intraoperative tests were satisfactory: R-wave amplitude of 4.5 mV, lead impedance of 630 ohms and pacing threshold of 1.0 V x 0.4 msec. At the end of the implantation, a manual compression of the femoral vein was performed in order to achieve hemostasis at the puncture site. The total procedural time was 21 minutes, with a fluoroscopic time of 6 minutes. There were no intra or peri-procedural complications and the patient was discharged the day after. Parameters remained stable and acceptable at 3- and 6-month follow-up appointments (Figure 4).

Discussion
Since the first idea to use ‘electricity’ for heart stimulation in 1774 and the first complete implant of a pacing system in 1959,1 the technology of cardiac devices has evolved considerably to treat bradyarrhythmia and tachyarrhythmias. Nowadays, the conventional pacing systems consist of a small size-battery, an electronic circuit and leads. Despite improvements in diagnostic and therapeutic features, transvenous leads remain the weakest link of the pacing system. There are 65,000 lead failures annually in more than 4 million implanted systems worldwide2. Insulation defects due to abrasion and traction, metal ion oxidation, and conductor fracture are all reported and result in lead malfunction3, one of the most feared complications alongside infection. 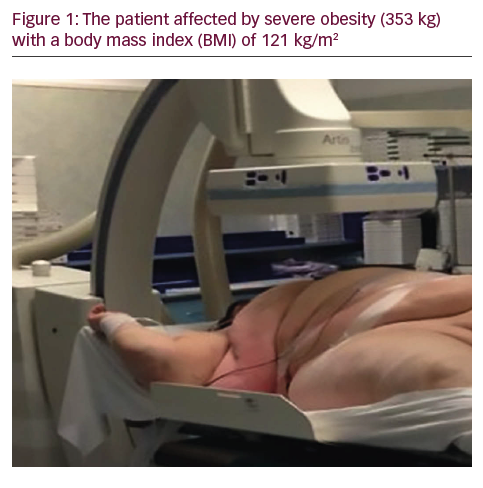 By 1970 the concept of a totally intracardiac self-contained pacemaker with miniaturised batteries and electronic circuits4 had already emerged, but, until 2012 there were no implants in humans. Nowadays, two types of LPM exist: Nanostim™ Leadless Pacemaker System and Micra™ Transcatheter Pacing System (Medtronic, Minneapolis, MN, USA), both of which lead stimulation from the RV apex or low septum at the desired lower rate, with rate responsive algorithms. They involve two different types of engage: screw fixation for the Nanostim™ with a steroid-eluting tip, and passive fixation for Micra™. Both systems allow the absence of a surgical pocket and transvenous leads. The leadless PM were designed to be retrieved and although some data are available regarding acute repositioning, no data exist for the removal of chronic implanted systems.

The currently available intracardiac pacemakers are suitable for patients who have an indication for single chamber (VVI/VVIR) pacing pacing (Class I and II of the current guidelines), as an alternative to conventional transvenous pacemakers (PM).

The LEADLESS trial5 was a prospective, multicentre, non-randomised trial enrolling 33 patients from December 2012 to April 2013. All patients received an LCP. The primary end-point was freedom from serious adverse device events at 90 days. One patient died after an ischemic stroke following an emergency surgery for cardiac tamponade and one patient needed retrieval of the LCP wrongly implanted in the left ventricle. Implant success rate was 97% and all parameters were comparable to standard pacemakers. The 1-year follow-up reported stable pacing parameters with no infections, dislodgments or other complications.

Despite the current guidelines for the positioning of the LCP, indications may also be extended for borderline cases, after a collegial medical decision regarding the best strategy for each patient. Recently, Tjong et al.6 reported their successful leadless implant experience in a patient with a previous bilateral lead extraction for infected system and Fundim et al.7 reported their successful experience of transcatheter LCP implantation for complete heart block following transcatheter aortic valve replacement.

To our knowledge this is the first reported case of a leadless pacemaker implant in a severely obese patient. We demonstrate the feasibility of 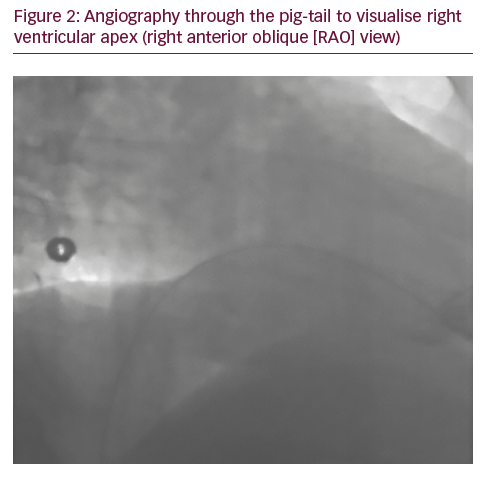 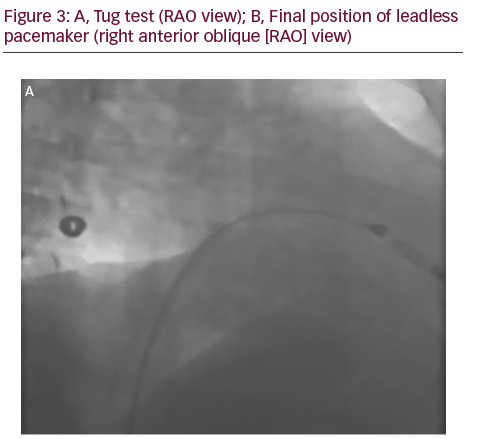 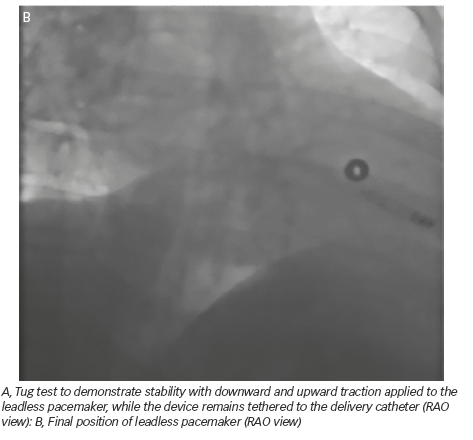 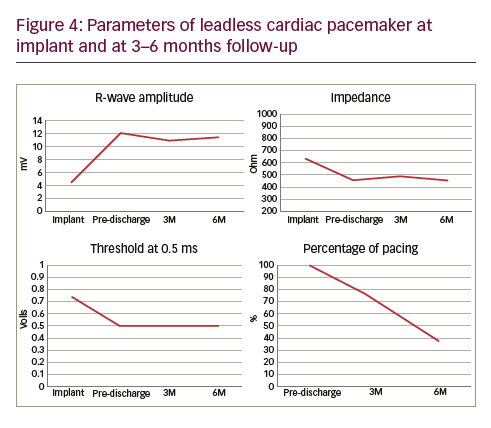 the procedure and the excellent telemetric (conductive) communication between the LCP and the programmer despite the critical mass of the patient. The issue regarding BMI and telemetric communication of LCP has never been investigated before.

Obesity is a disease of civilisation on a global scale, and the number of obese people continues to grow, especially in developed countries. The World Health Organization (WHO) has identified obesity as the biggest public health problem and reported that in 2008 the problem of being overweight affected 1.4 billion people, and obesity more than 200 million men and 300 million women worldwide.8

Conventional positioning of pacemaker via subclavian (or cephalic/axillar) approach is unequivocally feasible in the majority of patients needing cardiac stimulation. In obese patients reaching the subcalvian vein can be very tricky, with a higher risk of pneumothorax than patients with a healthy BMI. If this complication occurs, choosing the optimal therapeutic strategy can be very challenging. Furthermore, obesity and diabetes are known risk factors for infection, which is a severe complication of cardiac implantable electronic devices (CIED) requiring complete removal of the system. Nowadays, transvenous lead extraction is the strategy to manage such complications, although it is a complex procedure that has to be performed by high expertise operators. A LCP does not require a generator pocket, which considerably reduces the risk of system infection.

The decision regarding the implant of a LCP has to be individualized, balancing the advantages and disadvantages for the patient. Reported rates of right ventricular perforations are higher with LCP compared to the conventional pacemaker (1.6% versus 0.2–0.8%)9,10, although there are no direct lead related complications. Migration of the system has been reported as an infrequent complication (0–0.4%), as well arteriovenous fistula or pseudoaneurysm (0.6–0.7%).9,10

A limited market release of Nanostim™ is currently underway, following two deaths due to cardiac tamponade. Further studies are needed to better characterise this system and validate the strategy in this subgroup of obese patients.

Antonio Curnis, Francesca Vassanelli, Manuel Cerini, Lorenza Inama, Francesca Salghetti, Antonio D’Aloia and Luca Bontempi have nothing to disclose in relation to this article. No funding was received in the publication of this article.
Compliance with Ethics:All procedures were followed in accordance with the responsible committee on human experimentation and with the Helsinki Declaration of 1975 and subsequent revisions, and informed consent was received from the patient involved in this case study.