Background: The learning curve for the novel 3D electroanatomical system Rhythmia is unknown.

Those procedures that showed correlation with experience using Rhythmia were divided into two groups: P1, where performance markers were improving, and P2, when a plateau had been reached. The threshold number of procedures between P1 and P2 was decided from assessment of scatterplots and comparison with the control group.

Conclusion: A short learning curve was demonstrated with the use of Rhythmia HDx for standardised procedures (de novo AF/AFlut). Procedural performance improved and became comparable to Carto3 following 10 cases at each centre. Clinical outcomes at 6 and 12 months, and complications did not improve with experience and were no different from controls. 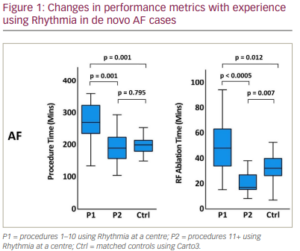