Introduction: Catheter ablation for atrial fibrillation (AF) is safer than pharmacological alternatives but requires constant vigilance to maintain this safety. We present a case report of a patient who developed stridor and progressive dyspnoea in the hours after ablation for AF.

Case report: A 74-year-old female with impaired ventricular function (ejection fraction 35%) underwent redo ablation AF under general anaesthesia without interruption of anticoagulation. Transeptal puncture was performed without difficulty. Pulmonary veins were isolated at baseline; radiofrequency energy was applied at the left atrial roof and posterior wall, and cavotricuspid isthmus by QDOT® catheter (Biosense Webster) using standard protocols without immediate complication. Approximately 10 hours post-ablation, the patient reported a foreign-body sensation in the throat, then progressive shortness of breath with stridor. Chest X-ray performed 16 hours post-ablation demonstrated widening of the upper mediastinum (Figure 1A); computed tomography (CT) at 24 hours post-ablation confirmed a superior mediastinal haematoma, with a maximum size of 6 × 3.5 cm extending to 12 cm into the neck and compressing surrounding structures including displacement of the trachea with the luminal diameter squeezed to 5–6 mm (Figure IB). The patient was transferred to the intensive care unit (ICU) where her airway was secured with an 8-mm (internal diameter) endotracheal tube for positive pressure ventilation. Due to the patient’s stable haemodynamics, a multidisciplinary team (electrophysiologist, intensivists, respiratory physician, thoracic surgeon and cardiac surgeon) decided to avoid surgical intervention. Repeat CT scan on ICU Day 3 showed the haematoma had decreased to 5.7 cm transversely, with reduced compression to the trachea (Figure 1C). The patient was extubated and transferred to the cardiology ward. On Day 8, oesophagogastroscopy showed no oesophageal injury. Anticoagulation was resumed and the patient was discharged from hospital.

Conclusions/implications: To our knowledge, this is the first report of superior mediastinal haematoma following ablation. The mechanism is difficult to explain. Possibilities include blunt trauma to the tissues around the oesophagus during placement of the transoesophageal echocardiography probe, perforation of the superior vena cava by the transseptal needle or sheath during preparation for trans-septal puncture, or perforation of the left atrial roof during ablation; whichever of these initiated the bleeding, anticoagulant therapy was a factor in its development. However, this case offers lessons that the sensation of a foreign body in the throat beginning soon after ablation should arouse suspicion, while the occurrence of stridor demands urgent imaging of the superior part of the thorax and the lower neck. The response to ventilation suggests that a conservative approach rather than early surgical intervention should be considered as first line in such cases 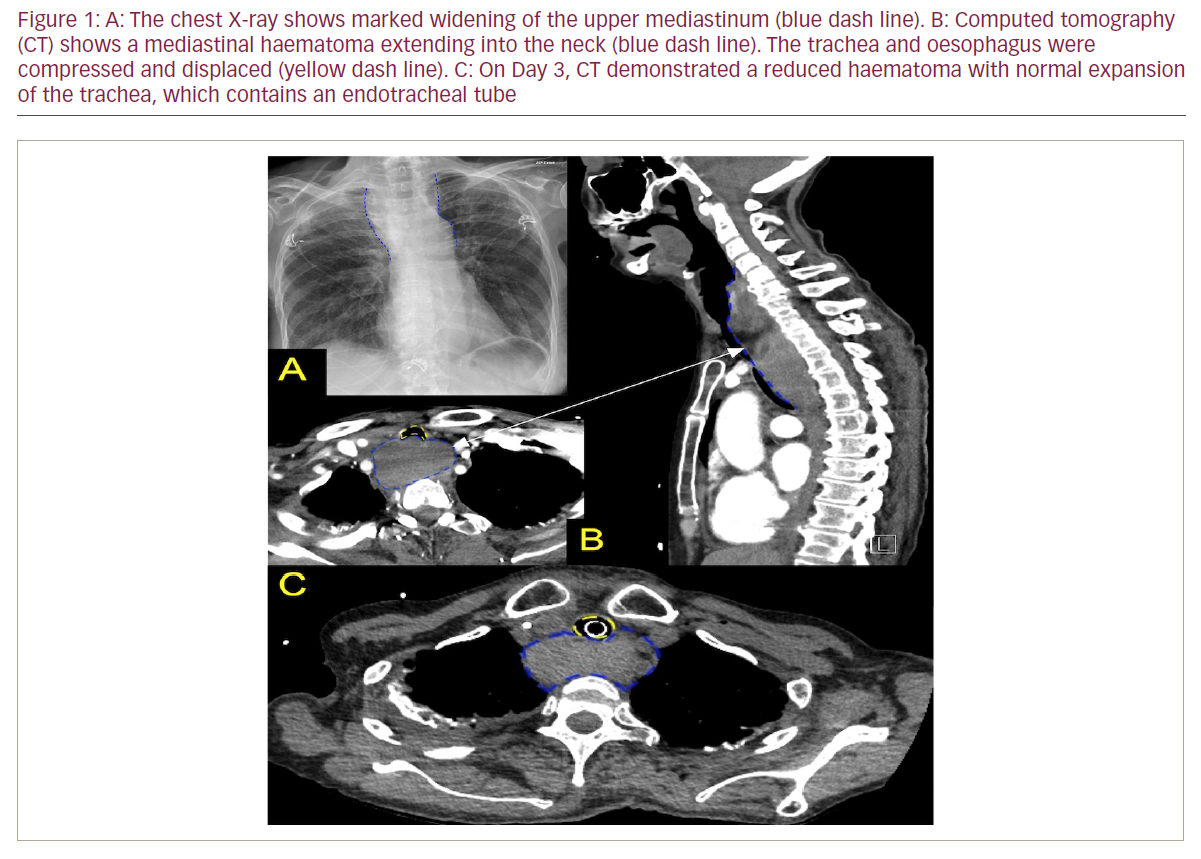