Background: Transseptal puncture is a key component of cardiac ablation and structural interventional procedures. The VersaCross RF transseptal puncture (TSP) platform (Baylis Medical) is a novel system comprising a blunt radiofrequency (RF) wire rather than a needle, passed through a malleable sheath/dilator. The wire forms a pigtail on deployment and is firm enough to exchange over. This study details the first experience of the use of this novel technology in Europe, and the first worldwide without echocardiographic guidance.

Methods: Consecutive patients undergoing TSP were included in the VersaCross group followed by a control group using standard equipment. All 5 operators used the VersaCross system in 2–3 cases prior to data inclusion in the study. Interventions were performed under general anaesthetic or sedation, with transoesophageal echo (TOE) used in a subset to guide the puncture. TSP and fluoroscopy times were prospectively recorded from the point when the drop down from the superior vena cava (SVC) was started until the VersaCross sheath was passed into the left atrium (LA). For double transseptal access, the latter was taken as the time the second separate transseptal puncture was completed or, based on the operator’s preference, a second sheath had been passed into the LA through the initial puncture. Also recorded were the number of drop downs from the SVC and number of RF applications or needle deployments on the septum. Immediate and post-discharge complications were recorded.

Results: The VersaCross (n=50) and control (n=25) groups had a mean age of 61.9 ± 11.1 years vs 64.2 ± 11.3 years; 54% vs 68% male; BMI of 29.1 ± 5.3 vs 29.3 ± 5.1; 34 vs 28% with prior TSP procedures; 98 vs 100% on anticoagulation; 10 vs 16% with pacemakers; and 38 vs 40% under TOE guidance (p>0.05 for all). Ablations for AF predominated in both groups (86 vs 92%), of which approximately half were cryoablations (49% vs 56%). The remaining cases were for atrial or ventricular tachycardia. For both single or dual transseptal access, there was no correlation between transseptal or fluoroscopy time and procedure number in the VersaCross group. There was no difference in transseptal or fluoroscopy time between the VersaCross and control groups (p>0.05 for all) (Figure 1). VersaCross cases needed an average of 1.5 ± 1 drop downs and 1 ± 0.7 RF application per TSP. For control cases this was 1.5 ± 0.9 and 1 ± 0.6 deployments, respectively (p>0.05 for both). In the VersaCross group, four minor complications occurred: one case of atrioventricular block lasting seconds on application of transseptal RF and three small pericardial effusions not requiring intervention. One of these was diagnosed 23 days after the procedure, and another was in a patient with a temporary pacing wire placed pre-ablation. Of the three effusions, two occurred in cases performed without TOE but this was not statistically significant (p=0.5). There was one major complication in this group of haemothorax requiring chest drain insertion. In all VersaCross cases, TSP was completed without converting to another technology, whilst two needed to be abandoned in the control group – one due to patient discomfort and another due to cardiac tamponade. There were no other complications in the control group.

Conclusions: The VersaCross transseptal system can be used in a variety of ablation procedures with or without echo guidance. No quantitative learning curve was evident and, compared with conventional TSP technology, no difference in TSP or fluoroscopy time. 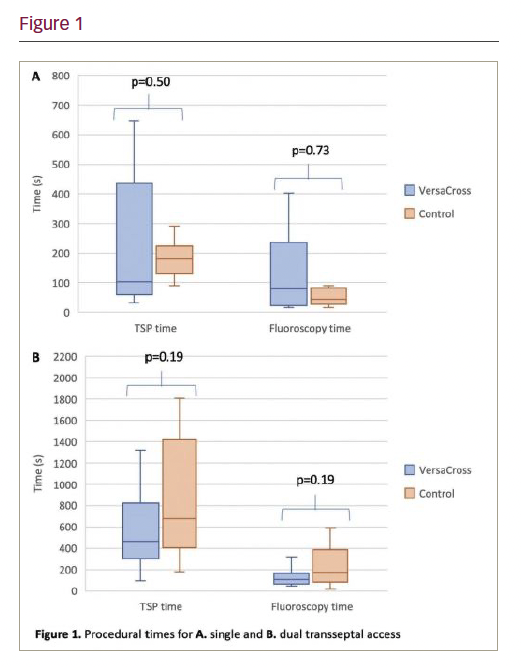