Background: Atrial fibrillation (AF) is a common arrhythmia and is associated with a high risk of mortality and morbidity due to stroke, heart failure and dementia. AF is a major contributor to healthcare costs, but we need greater understanding of the main cost drivers (e.g. hospitalisations) of this increasingly prevalent arrhythmia. Such data would help with NHS resource planning over the next decade.

Methods: Based on prior published data, we initially calculated direct costs of AF for 1995, and then again for 2000, using contemporary and extrapolated data that have been used as the basis for forecasting AF costs in the UK and as a share of total NHS expenditure. AF direct costs have been split between cost driver categories; GP consultations, GP referred OPD visits, prescriptions and monitoring visits, primary admissions and post-discharge OPD visits. Forecast assumptions used: (i) NHS expenditure from 2020 onwards assumed to increase at annual rate of 3%/year; and (ii) the UK inflation rate to increase by 2% annually. Sensitivity modelling of 3%, 4% and 6% projected annual increase in AF prevalence amongst the population was applied.

The full cost of AF related hospitalisations may still be underestimated, due to the other admissions associated with a secondary coding of AF, which in 2020 are forecast to cost between £2,269m and £4,030m, depending on the annual population increase of AF prevalence. There will be an increasing number of patients discharged to a nursing home after a hospital admission associated with a principal AF diagnosis. The cost estimate for this in 2000 was £111m which is predicted to rise to somewhere between £346m and £614m by 2020.

Conclusions: Focussing on 2020 and direct costs alone, AF is predicted to cost between 1-1.6% of NHS expenditure, mostly from primary admissions. If hospitalisations can be avoided or reduced, we would substantially reduce the healthcare costs of AF to the NHS. Improved strategies to reduce the NHS healthcare cost burden of AF are urgently needed with a particular focus on reducing the number of hospitalisations. 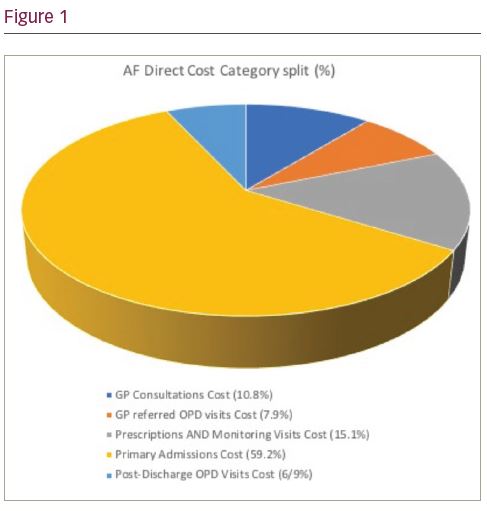