Introduction: Second-generation cryoballoon ablation is safe and effective in patients with paroxysmal atrial fibrillation (AF). Previous studies have found there to be high acute rates of pulmonary vein (PV) isolation with the Artic Front Advance catheter. Reaching a nadir temperature of -40° has also been shown to achieve electrical isolation of the pulmonary veins. The aim of this study is to report the long-term outcomes of paroxysmal AF patients who underwent cryoablation without concurrent electrical mapping.

Methods: 228 patients (mean age 66.7 ± 10.0) who underwent cryoablation without electrical mapping from January 2015 to April 2019 in Eastbourne District General Hospital were followed up for a mean duration of 26.8 ± 16.7 months. The primary endpoint was freedom from AF, atrial flutter, or atrial tachycardia ≥30s after a 90-day blanking period. 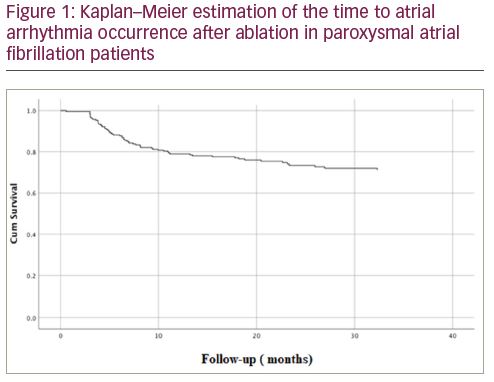