Methods: We utilised the Korean National Health Insurance cohort database, comprised of every citizen in South Korea, to identify patients who underwent AF ablation between 2006 to 2015. Abdominal obesity was defined as waist circumference ≥90 cm for males and ≥80 cm for females. The primary endpoint was AF recurrence following ablation, and secondary endpoints were cardioversion, repeat AF ablation, ischaemic stroke, intracranial haemorrhage and death. These endpoints were evaluated at 1, 3 and 6 year follow-up. Additionally, safety endpoints of peri-procedural complications were studied.

Results: Of the included 5,397 patients, 1,273 (23.6%) were females and the median age was 58 (IQR 51 – 65) years. Abdominal obesity was present in 2,035 (37.7%) patients who had an increased prevalence of concomitant diseases including chronic kidney disease, chronic obstructive pulmonary disease, diabetes mellitus, heart failure, hypertension, obstructive sleep apnoea, liver disease and peripheral vascular disease. The median CHA2DS2-VASc was greater in patients with abdominal obesity compared to those without abdominal obesity (2 [1 – 4] vs 2 [1 – 3], p<0.001). The rate of AF recurrence was not statistically different between the groups at 1-year (10.1 vs 8.7 events/100 PYs, p=0.094), though abdominal obesity was associated with significantly higher rates of AF recurrence at 3-year (7.3 vs 6.4 events/100 PYs, p=0.049) and 6-year (6.1 vs 5.3 events/100 PYs, p=0.019) follow-up. Kaplan-Meier survival analysis demonstrated similar results, with a log-rank p=0.035 (Figure). Using multivariable regression analysis, abdominal obesity was found to be an independent predictor for AF recurrence (HR 1.14, 95% CI 1.00 – 1.30, p=0.049), after accounting for other risk factors. Overall complications and length of hospital stay were comparable between both groups. However, there was a trend for reduced pericardial effusion among patients with abdominal obesity (3.6% vs 4.7%, p=0.053), with significantly less cardiac tamponade as a consequence (2.5% vs 3.5%, p=0.049).

Conclusion: Abdominal obesity as indicated by waist circumference was associated with a greater burden of concomitant diseases and an independent risk factor for long-term AF recurrence following catheter ablation but had no effects on total peri-procedural complications. Overall, waist circumference may provide a useful, simple marker for clinical risk stratification to guide clinical-decision making in patients undergoing AF ablation. 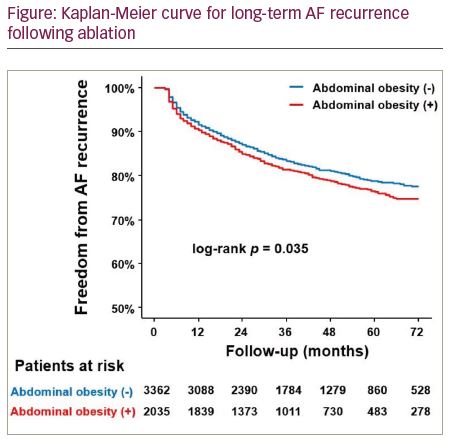