Introduction: Pacing-Induced Cardiomyopathy (PICM) can lead to significant morbidity, requiring treatment by device upgrade procedures. The risk of occurrence is directly related to the burden of right ventricular pacing, which can often be reduced by careful device programming. When however frequent ventricular stimulation cannot be avoided, pacing the conduction system may offer an alternative to myocardial pacing and thus reduce the risk of PICM. The most recent international guidelines1 recommend that His-bundle pacing should be considered among 1) patients with EF 36-50% and expected to require >40% ventricular pacing (Vp>40%) (class IIa); and 2) patients requiring pacing who have block at the level of the AV node (class IIb). This study sought to determine how many patients undergoing bradycardia pacing would have fulfilled those criteria.

Methods: This was a single-centre retrospective study over a 5-year period to the end of April 2020. Demographic and clinical details of patients receiving device implants were obtained from the Pacing Service Database, along with the indication for pacing, electrocardiographic and echocardiographic data. A cardiology consultant with a special interest in pacing reviewed each case with regards to the likelihood of requiring >40% ventricular pacing. Heart block at the level of the AV node was considered present if patients presented with a narrow QRS in conjunction with second or third degree heart block.

Results: A total of 1,265 patients underwent pacemaker implantation for bradycardia during the study period, 890 for conduction system disease (198 with second degree block, 333 with complete heart block), 349 for sinus node disease and 26 for other indication. Figure 1 shows a flowsheet of those expected to require Vp>40%. In total, 175 patients had a class IIa indication for His-bundle pacing. After excluding those who did not have an echocardiogram, this equates to up to 30% of those with expected Vp>40% and up to 18.6% of the total pacemaker population. Some 237 patients had block at the level of the AV node – 35 of these patients also fulfilled the class IIa criteria for His-bundle pacing; 202 patients (16% of the total) had a sole class IIb indication for His-bundle pacing.

Conclusion: Up to 35% of patients receiving pacemaker implantation for bradycardia may be considered for His-bundle pacing. This has significant implications for training and service delivery initially, but likely beneficial health economics in the longer term. 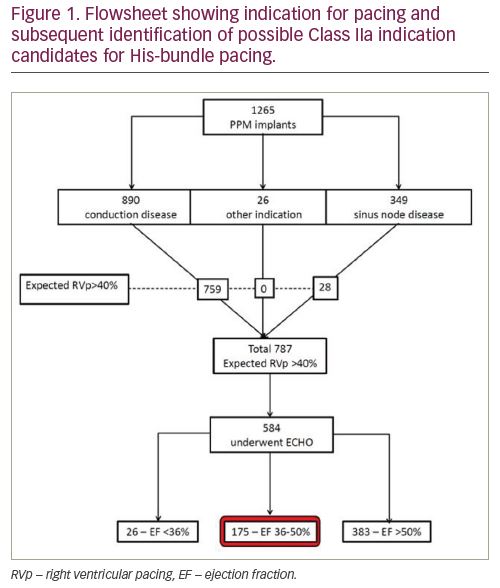