Introduction: Cryoballoon is an effective treatment for atrial fibrillation and is conventionally guided by fluoroscopy with contrast venography to confirm pulmonary vein (PV) occlusion.  The Kodex-EDP system (EDP Solutions, Philips) is a novel non-contact navigation and mapping system using the unique dielectric properties of biological tissue.  The system measures the varying potentials induced on standard catheter electrodes as it moves within an electrical field generated by body surface patches.  Marked gradients in the electrical field occur near endocardial structures meaning the system can accurately delineate cardiac anatomy.  The system does not require tissue contact to construct anatomy.  The system also includes a PV occlusion tool which measures the change in dialectic properties from baseline (balloon not in tissue contact) to when circumferential tissue contact is achieved, thereby indicating the degree of PV occlusion. This tool has the potential to markedly reduce procedural fluoroscopy exposure if accurate enough to replace contrast venography. This pilot study aimed to assess the diagnostic accuracy of the occlusion tool.

Methods: A retrospective blinded review of contrast venograms was performed and compared with the results of the occlusion tool.  Contrast venography was classified on a graded scale from 1 (negligible occlusion with rapid outflow from the PV) to 4 (total occlusion with complete contrast retention). Grades 3 and 4 were considered indicative of satisfactory PV occlusion.  The Kodex-EPD system displays the PV as 4 quadrants.  All 4 quadrant displays reading green indicates complete PV occlusion (Figure 1). The first case was performed with software version 1.4.6 with the remaining 5 cases using version 1.4.6a.

Conclusion: In this study, the PV occlusion tool of the Kodex–EDP system had a high sensitivity and moderate positive predictive value but low specificity for PV occlusion as determined by contrast venography. Therefore, while the tool has the potential to substantially reduce fluoroscopy exposure, the current software version may not currently have sufficient diagnostic accuracy to replace contrast venography. 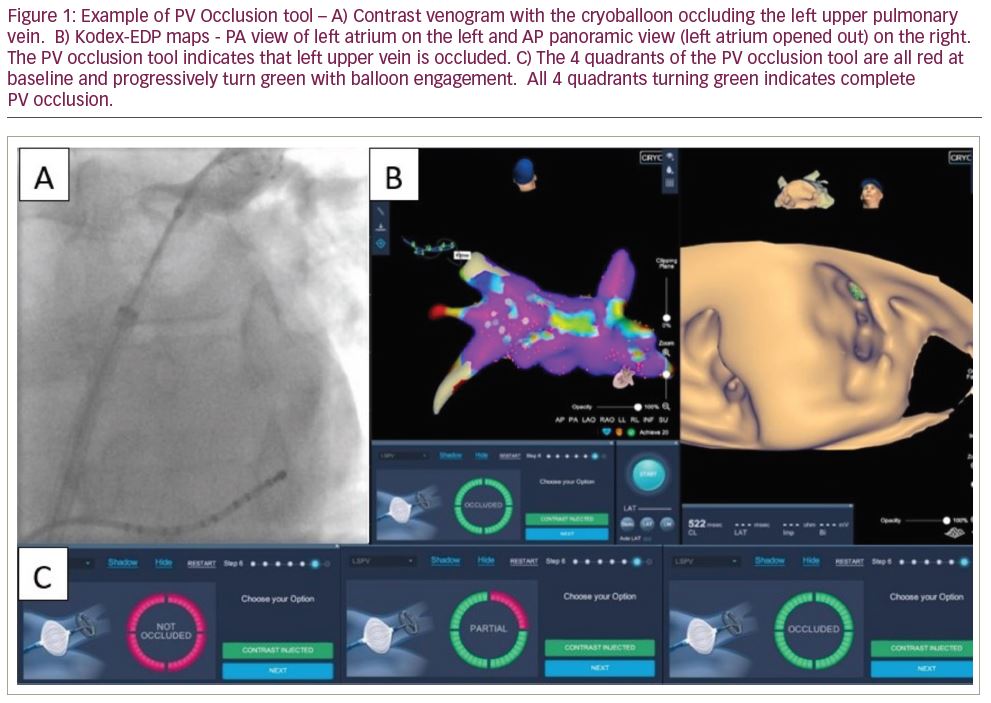