Methods: 2712 consecutive patients who underwent catheter ablation for AF in our institution between 1st June 2016 and 31st Dec 2019 were included in the study. Both de novo ablations and redo procedures were included and results analysed on a per-patient basis from a prospectively entered database. Our institutional procedural database was cross referenced with the SPINE and the Cerner NHS portal. SPINE is the NHS digital portal allowing exchange of information across local and national NHS systems, including primary care records and notifications of death. This significantly increases the validity and reliability of our mortality data in our patient cohort. Early mortality was defined as death within 30 days of the procedure.

Results: The database consisted of 2712 patients who underwent 2924 AF ablation procedures within the study period. 63% were male and mean age 59±16 years. 50% of patients had paroxysmal AF, 31% persistent and the remainder longstanding persistent AF. 62% of procedures were de novo and 51% were Cryo balloon ablation. Early all-cause mortality (within 30 days) was 0.03% (1 patient). This patient had a compassionate procedure in the context of severe complex congenital heart disease, complicated by congestive cardiac failure and later succumbed to nosocomial infection during the recovery period.  A second patient died at 48 days following complications related to a procedure-related atrio-oesophageal fistula. Overall procedure-related mortality at 6 months was therefore 0.07% (2 patients); a total of 9 reported deaths (0.33%) occurred over 12 months follow up (Figure 1). 12 months survival was 99.6%. No late or missed intra-procedural complications were observed amongst the patients who died over 12 month follow up. Major complications occurred in 2.9% of patients underwent CA for AF (Figure 1). Pericardial effusion requiring drainage was the commonest complication (1.6%, 44 pts), with a small proportion (0.07%, 2 pts) presenting late as delayed tamponade following discharge. 17 patients had vascular complications requiring intervention and 13 patients had phrenic nerve palsies after ablation that had not resolved at 6 weeks. No non-fatal complications resulted in long-term disability.

Conclusion: This study demonstrates a very low single-centre mortality following AF ablation. Our contemporary real-world study used a national population wide database to ensure completeness of data, and can be seen as highly reassuring following concern after recently published US nationwide data. Our outcomes may directly reflect the positive outcome of reduced risks and early mortality in our high volume centre (nearly 800 AF ablations year) and therefore supports the argument that AF ablation should be concentrated in such centres. 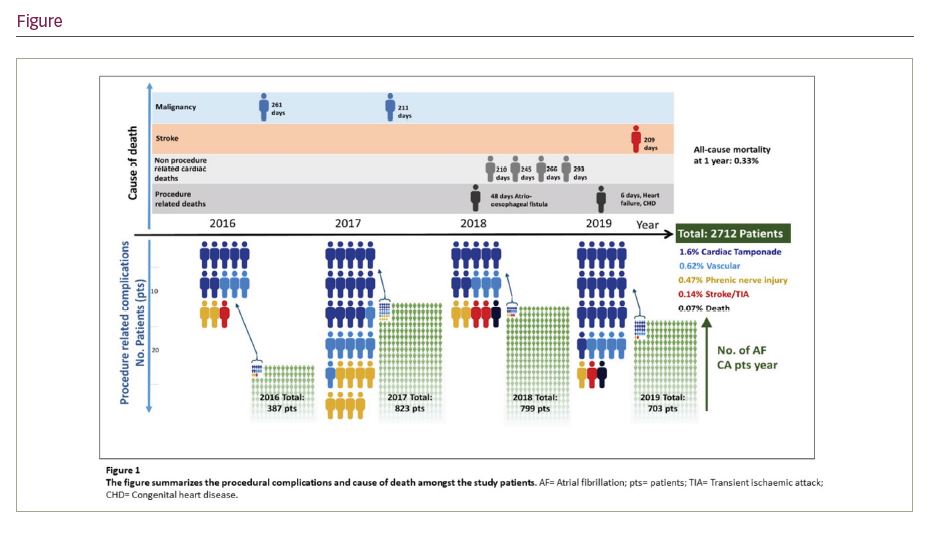