Methods: Patients undergoing CPVA for persistent AF using the Precision™ 3D navigation system were recruited. An AFocusII catheter was positioned on the left atrial endocardium and 30 s of AF was recorded at multiple sites prior to CPVA. Following CPVA, this was repeated at the same locations. The data were exported to a custom-written MatLab program and analysed. The RETRO-mapping algorithm produced continuous activation maps and screened 2 ms time windows for evidence of focal activation, planar waves and wavefront collisions. These automated categorisations were manually validated and compared between pre/post CPVA using a standard T-test. 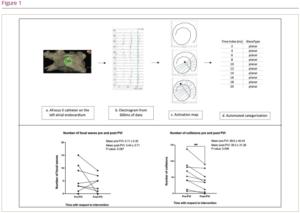