Methods and results: In patients with paroxysmal AF, a 3-centre, prospective, randomised, controlled trial was performed (GANGLIA-AF; NCT02487654). GPs were identified using a Grass S88 Stimulator (Astromed) to deliver HFS from a CARTO Smart-Touch catheter. The primary aim was to target ET-GP during sinus rhythm by delivering HFS within the atrial refractory period and ablate these until non-functional (Figure). If triggered AF became incessant, the AVD-GP were ablated instead. The trial compared GP ablation (GPA) without any attempt to isolate the PVs against PVI by CARTO optimized workflow. Follow-up was for 12 months with 3-monthly 48 hr Holter monitors. The primary endpoint was ≥30s atrial arrhythmia in ECGs after a 3-month blanking period post-ablation. Secondary endpoints included complications and redo ablations. On an intention-to-treat (ITT) basis, 100 pts (57 GPA, 43 PVI) completed 1-year follow-up. 11 patients were withdrawn and 6 crossed over from GPA arm to PVI arm due to technical problems completing the GP mapping protocol. Randomisation was weighted towards GPA to maintain similar per-protocol (PP) numbers (43 GPA, 40 PVI). Patients undergoing GPA had on average 89 ± 27 HFS sites tested per patient, identifying 20 ± 11 (22.5%) GPs. The freedom from ≥30s atrial arrhythmia at 12-month follow-up in the ITT group was 54% (31/57) GPA vs 63% PVI (27/43) (HR 0.725 [95% CI 0.39-1.3], p=0.30). In the PP group: 49% (21/43) GPA vs 60% (24/40) PVI (HR 0.67 [95% CI 0.35-1.26], p=0.21). The primary endpoint in both ITT and PP groups showed no significant difference between the two arms. The average RF energy used in the GPA cases was significantly less than in the PVI cases: 35.4 kWs ± 15.6 vs 63.2 kWs ± 35.5 (p<0.0001). On a PP basis there was no significant difference in the freedom from redo ablations for symptomatic recurrence between the two arms: 65% (28/43) GPA vs 67.5% (27/40) PVI (p=0.82). 2 complications occurred in the GPA arm.To characterise the anatomical distribution of GP further, CARTO maps (n=54) were merged and transformed into one left atrial geometry using a semi-automated process. ET-GP and AVD-GP had distinct anatomical distribution that contrasted each other. Most ET-GP were in the roof and around the PV ostia, and therefore more likely to be inadvertently ablated during PVI. By studying ET-GP functional response to HFS in Langendorff-perfused whole porcine hearts (n=4), we were able to demonstrate significantly increased density of nerves in these locations (41 ± 44 vs 16 ± 20, p=0.04). We also studied the role of GPA in patients with previous AF ablation and durable complete PVI (n=3). Both AVD-GP and non-PV ET-GP were identified and ablated. 1 patient was rendered free of AF at 12 months follow-up, and 1 patient had recurrence at 11 months.

Conclusion: GPA can prevent AF without the need for PVI in patients with paroxysmal AF. In addition, GPA can be achieved with less RF energy than PVI implying a more specific technique on mechanistic grounds. GANGLIA-AF provides evidence that GPA may be an alternative or an adjunct technique to PVI. Further studies are warranted to investigate the role of GPA in patients with complete PVI. 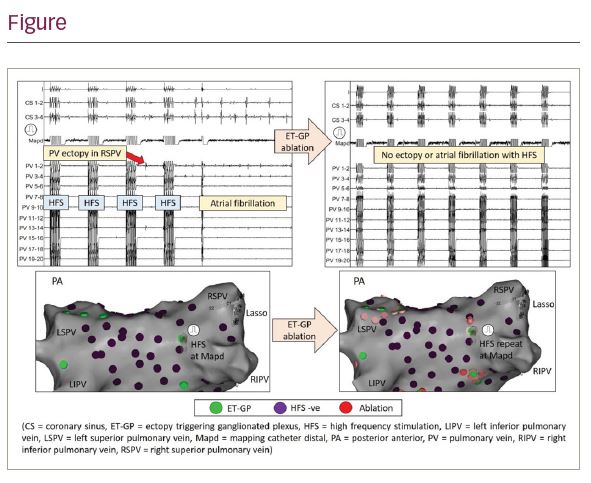 Long-term follow-up of patients with atrial fibrillation (AF) has confirmed a significant increase in cardiovascular events, long-term risk of stroke, heart failure and all-cause mortality (89% in those with AF compared to 27% in those without AF).1 Not only is AF associated with a five-fold increased risk of stroke, AF-related stroke is also likely to […]