Background: Mechanisms for persistent AF are unclear. On the basis that sites where ablation terminates persistent AF may have mechanistic relevance, we systematically compared maps created by three different techniques for analysing the same raw electrographic data in cases of clear termination of persistent AF by ablation in an international
five-centre registry with data/code made available online.

Results: In total 80 patients (65 ± 9 years, 17% female) had AF termination to sinus rhythm (63%) or atrial tachycardia, either
pre-PVI (73%), during PVI (3%) or post-PVI (24%). Pre-ablation AF maps from unipolar multipolar electrograms compared between the three methods showed disorder and organized sites, whose number varied per method (p<0.05). Figure 2A shows termination of atrial fibrillation pre-pulmonary vein isolation in the right superior pulmonary vein antrum in a 49-year-old male with previous ablation. Figure 2B shows abrupt termination to sinus during RF. Figure 2C shows activation mapping reveals a partial rotation at the site of termination, whereas Figures 2D and 2E show agreement with a full stable rotation seen in both phases only (D) and activation/phase (E) approaches. All maps were as read by five blinded reviewers. Overall, spatial mapping methods varied in their sensitivity for potential drivers, for method 1 (28.4%), 2 (83.8%) and 3 (82.4%) cases (p<0.01). Rotations/foci were less prevalent at random control sites by methods 1–3 (0%, 5.4%, 6.8%, each p<0.05 versus termination sites), Figure 3. In a subgroup analysis of 27 patients, overlapping bipolar and unipolar voltage was reduced at termination sites compared to randomly selected control sites.

Conclusions: In this large systematic mapping study, sites where ablation terminated persistent AF, but not control sites, showed organized activity by three major mapping methods. Sustained, organized activity was revealed at termination sites by novel mapping methods in most patients, and by traditional maps in a minority. Multicentre comparisons of mapping methods in patients with and without clinical endpoints may help classify AF mechanisms and reconcile approaches to substrate ablation. Reduced unipolar and overlapping bipolar voltage may reveal substrate for localised drivers of AF. 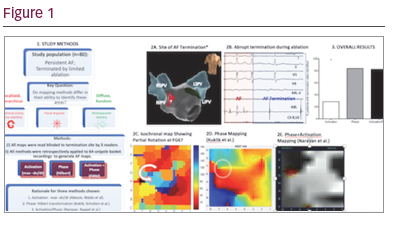