Background: Atrial fibrillation (AF) is the most common sustained heart arrhythmia and a major preventable cause of stroke, heart failure and dementia. AF already accounts for a significant amount of NHS funding, and over the coming years is highly likely to impose a growing cost on NHS budgets and the wider UK health care system. Predicting the likely healthcare costs of this increasingly common arrhythmia over the next decade would help with NHS resource planning.

Methods: Based on prior published data, we initially calculated the cost of AF for 1995, and then again for 2000 which was calculated from a combination of contemporary and extrapolated data from that time. These data have been used as the basis for forecasting AF costs in the UK and as a share of total NHS expenditure. Sensitivity modelling of 3%, 4% and 6% annual increase in AF prevalence amongst the population was applied to the starting point of the year 2000. From 2020 onwards, forecast assumptions used: (i) NHS expenditure from 2020 onwards assumed to increase at annual rate of 3%/year; and (ii) the UK inflation rate to increase by 2% annually.

Conclusions: Focussing on 2020 AF is predicted to cost the NHS a total of a minimum of £1,435m and a maximum of £2,548m (subject to the rate of increase in AF prevalence), between 1.1-1.6% of NHS expenditure. The latter would increase to 1.35-4.27% of NHS expenditure, over the next 2 decades, mostly from primary admissions. Improved strategies to reduce the NHS healthcare cost burden of AF are urgently needed. 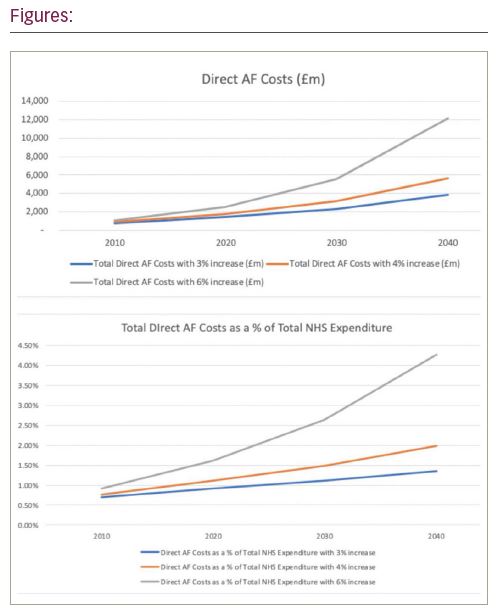