Introduction: Surgical aortic valve replacement (SAVR) improves outcome in patients with severe aortic stenosis (AS). Nevertheless, late mortality remains high (between 15-35% at 3.5 years in some series) following SAVR. Whether this is related to heart failure or brady-/tachyarrhythmia is unknown, and the burden of ventricular arrhythmia after
SAVR remains poorly characterised.

Objectives: To determine the incidence of ventricular arrhythmia, post SAVR for severe AS in patients with implantable electronic devices.

Methods: 134 consecutive patients undergoing SAVR for severe AS between April 2015 and May 2018 who had a pacemaker or defibrillator implanted post-AVR were retrospectively reviewed. Exclusions were more than moderate other valve disease, history of cardiomyopathy (n=18) and follow up at different centre (n=47). The primary outcome was the incidence of ventricular tachycardia, defined as ≥5 consecutive beats of broad complex tachycardia. Device and mortality data were reviewed via patients’ electronic records.

Results: 69 out of 134 patients with a device implanted post AVR were included (age 67 ± 14 years, 52 [75%] males) with 19 (27.5%) having undergone AVR and concomitant CABG. Common comorbidities were arterial hypertension (n=52; 75%), diabetes mellitus (n=10; 15%) and chronic kidney disease (n=4; 6%) with only a minority of patients having significant LV impairment (n=3, 4%). Devices implanted were permanent pacemaker (PPM; 83%), cardiac resynchronization therapy device CRT-P (11%) and CRT-D (6%). Bradycardia indications for implantation were atrioventricular block (77%), and sinus node disease (23%). 52 (75%) patients were prescribed ≥1 antiarrhythmic medication (Bisoprolol, Metoprolol, Sotalol or Amiodarone) with 4 (6%) taking a combination of two antiarrhythmics (Bisoprolol + Amiodarone, Bisoprolol + Digoxin). Data showed high incidence of paroxysmal atrial fibrillation (AF) post-op (N=61; 88%) with 18 (26%) patients remaining in persistent AF. 39 (57%) patients had ventricular arrhythmia, of which 32 (46.4%) patients had NSVT (<30 RR intervals) and 7 (10%) had sustained VT. Median duration of ventricular arrhythmias was 17 RR intervals (IQR: 8-27). During a median follow-up duration of 2.75 years (IQR: 2-3) 9 patients (13%) died, one of post-op complications, one of acute cardiac arrhythmia and 7 unknown. Of those that died after 30 days, 4 (44%) had documented evidence of NSVT/VT.

Conclusion: Ventricular tachycardia (VT/NSVT) is common in patients after SAVR for severe AS. 44% of patients who died post discharge had evidence of ventricular arrhythmia detected by the implanted device. Further prospective studies are required to determine the aetiology of arrhythmias, the region of substrate and their association with poor outcomes. 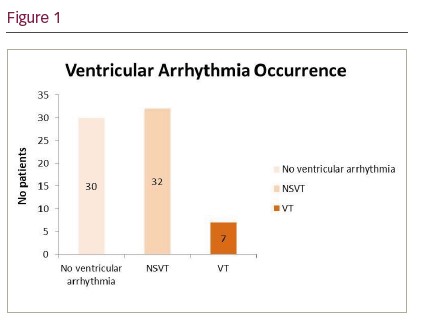